by Duarte Ramos in Scripts and Addons

To install download the file named Addon_DPFR_DistributeObjects_#_##.py and save it to a convenient location.

Under Blender got to the Edit menu and open Preferences > Addons, then press the button on top that reads Install.

Browse to the downloaded file, double-click to install it, then enable it in the check box to the left. If you don't have Autosave Preferences enabled press the Save Preferences button on the bottom left if you want the addon to be available for future sessions by default as well.

To use the addon just select a bunch of objects in the 3D View, then go to the 3D View header menu under Object > Transform > Distribute.

Adjust settings as desired in the operator properties panel to the bottom left. 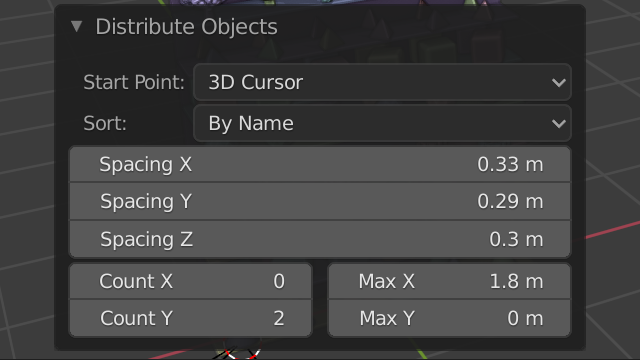 The addon works by always distributing along X then Y then Z axis by this specific order. To stack objects exclusively on the Y or Z axis limit the count or distance of the previous axis to 1 or 0 respectively.

If you only want to distribute along the Y axis you can do so by limiting the count on the X axis to 1, so it wraps immediately and starts stacking along Y then Z instead.

If you want to stack on Z axis limit both X and Y to the count of 1.