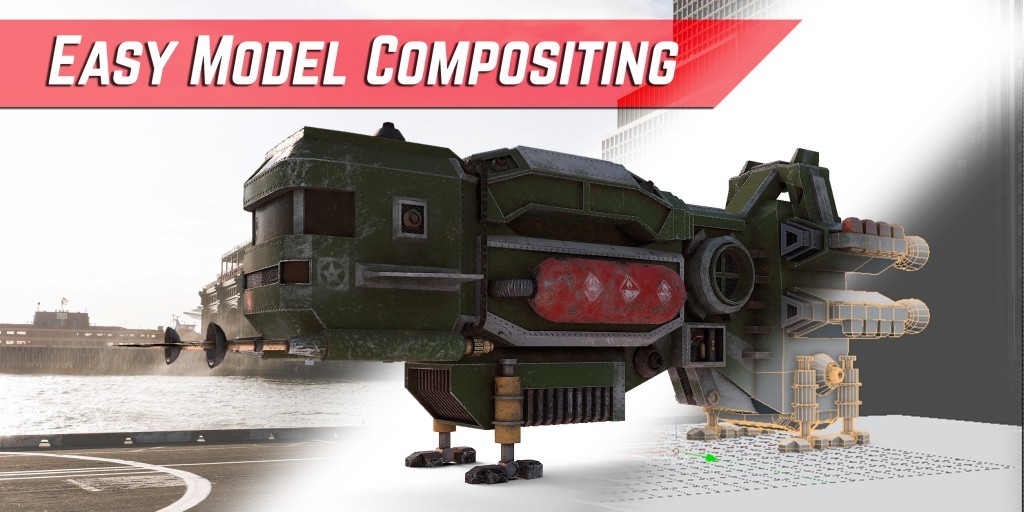 The Easy Model Compositing add-on is the result of a collaboration between two Blender Market Creators, Jeffrey Hepburn (JH) and John Roper (JR). We asked them why they built it, what their remote cooperation looked like and why they chose to offer their product on Blender Market.

Tell us a bit about yourself and your history with Blender.

JH: My name is Jeffrey Hepburn, I’m a freelance photographer, indie-filmmaker, and digital artist from Orlando, Florida. I’ve been working with Blender on and off for close to 6 years now. Originally it was more of a casual hobby, particularly back with 2.4 when the interface and features weren’t mature enough to really be inviting to new users. After the 2.5 release I started getting more into Blender for VFX and graphic design, but it’s really been the last year that I’ve felt I’ve made the most growth as a digital artist. I do game design in Unity 5 on the side as a hobby, and last summer I came across the Allegorithmic Substance Suite when looking into ways to create materials for Unity. UV Unwrapping, texturing, and materials were always some of my greatest weaknesses when it came to CGI, but the Substance Suite made it so much easier to make amazing looking materials that I really credit it for giving me the motivation and inspiration to keep pushing myself as a digital artist. I’ve been able to make things now which a year ago I know I couldn’t have. Since discovering the suite I got very into hard-surface modelling, material design, and texturing, and I was approved as a Blender Market creator in late January this year, which to me was one of the signs that I was starting to make it as a digital artist.

JR: My name is John Roper, I'm 14 years old, and I have worked with computer graphics for 5 years. I work as a freelance developer using a combination of programming languages including Python, Html, PHP, and C/C++. In addition to that, I work for Theory Animation as a developer and simulation artist. I am currently working on a bunch of my own projects and I am also working on a very special addon for Blender that I'll tell you about later. 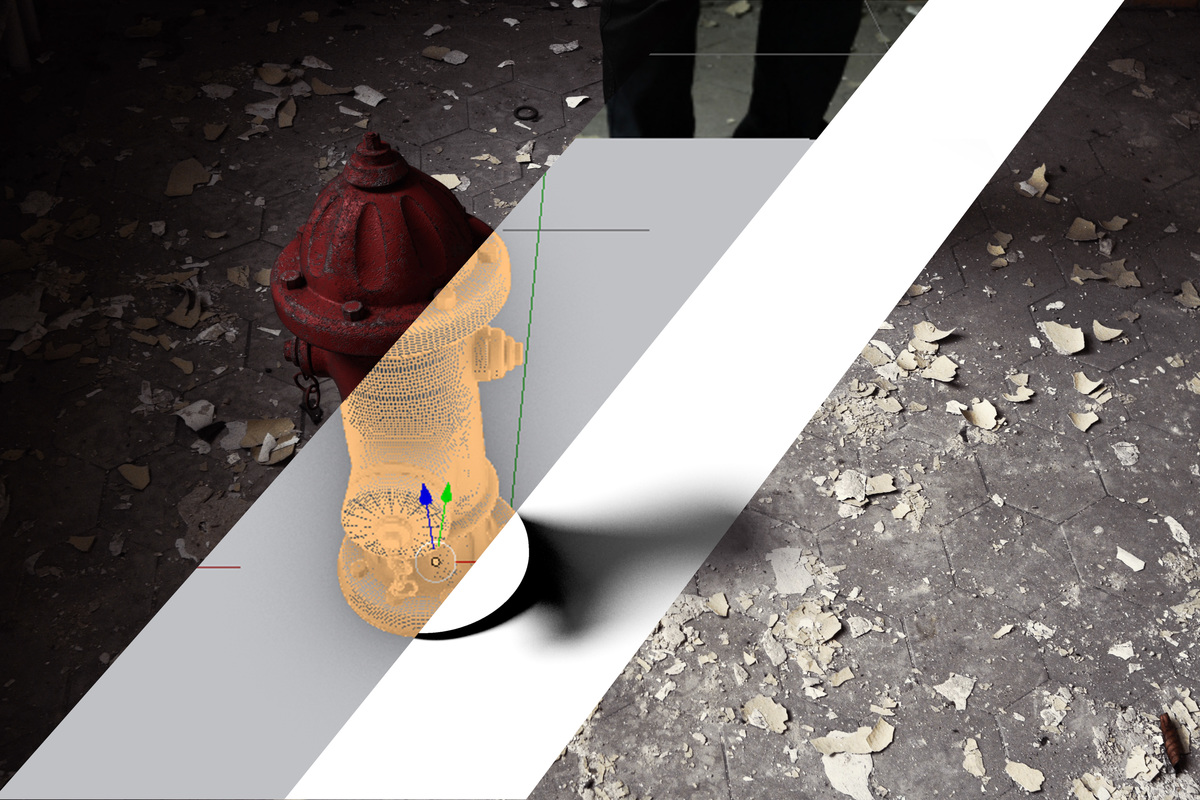 "My products on the Blender Market are extensions of my own workflow and solve issues that I was facing."

You recently joined up to collaborate on the Easy Model Compositing Addon: what is the addon all about?

JH: The 2 addons I have on the Blender Market, my PBR Uber-Shader, and the Easy Model Compositing Addon are all extensions of my own workflow. They’re solutions to problems I faced consistently in my own projects for my everyday work. EMC allows you to quickly and easily output Object, Shadow, AO, and Reflection passes from your scenes with the click of a few buttons. There’s not a lot of complicated setup involved, and it doesn’t require multiple render-layers which adds extra render passes and, therefore, extra time to your renders. For myself as a VFX artist and editor, it was a solution to the problem of being able to quickly get image sequences for compositing out of Blender for use in my preferred software: Photoshop and After Effects. I’d looked for other solutions, tutorials, etc… and found nothing that really met my requirements in terms of time and convenience. So I made my own solution which automatically outputs the passes and organizes them into folders, which works perfectly for single frames or whole animations.

"The add-on is something that will be consistently useful to anyone from VFX artists to people trying to show off their models."

Why did you choose to offer the addon on Blender Market?

JH: The addons I’ve put on the market are those that I feel will be consistently useful to people, that they’ll be using again and again in their projects. I want people to get value for their money. The EMC addon provided a solution I hadn’t seen offered anywhere else, something that will be consistently useful to anyone from VFX artists down to people just trying to show off their models. And, by offering it on the Blender Market, I can donate a portion of my sales to the Blender Development Fund, and the rest of the profits I make can go towards constantly updating and supporting my products as well as helping to support the tutorials I’ve started running on my channel to help people get into hard-surface modeling and Substance.

How did you get together to collaborate on the project?

JH: The Blender Market opened up a Slack Channel for the creators and admins to discuss ideas, including pitching new projects, asking for critique and feedback, working out collaborations and other things. John Roper was pitching an idea for his Command Line Argument Generator which I mistook for a way to quickly set-up Blender’s render settings to presets so people can quickly optimise their render time. We started discussing ideas back and forth in a private channel, I mentioned that I was planning to release the EMC addon as just a node like my PBR Uber-Shader, and John said he could really quickly and easily create an installer and interface for it to make it that much better.

What’s it like to collaborate on a remote project?

JH: I think it’s been really good to have someone to bounce ideas off of and share creations back and forth made with the addon. Sometimes on your own you can become too narrow-minded, get tunnel vision, and not notice problems that you take for granted because you know your own work. It’s good to be able to get feedback.

JR: One one hand, working by yourself can be a wanted thing. I have had my moments when I just feel like making whatever I want and I don’t want input from someone else. On the other hand, working with someone else is awesome because you can share ideas and help each other.

What will you work on next?

JH: I’ve started creating more walkthroughs and tutorials on my own channel to help people get into hard-surface modelling and texturing with Substance. I’ve had a lot of really enthusiastic feedback so far, and I like the idea of being able to finally give back to the community. I’ve spent a long time as someone learning off of others, doing my own thing, it’s nice to finally be in a position where I can feel confident enough in my work and how far I’ve come that I can offer insights to others who are just starting off as I did. I’m also continuing to support my addons on the market, in particular my PBR Uber-Shader. I created that addon as a part of my own workflow, taking textures from Substance for use in Blender, and I’ve used the solution in every one of my projects since. Every project I work on I learn more, add more to it, tweak it, refine it, and put those updates out to be shared with everyone who has supported my work. I really appreciate the unique opportunity it has presented me.

JR: I am currently working on a crowd simulator for Blender called CrowdMaster. A big publicized release will be coming, but for now, you can find the addon on its GitHub page.