by Joel's Blender Addons Store in Scripts and Addons

You can install the addon one of two ways.
1) Extract the onion_skin_tools folder from the .zip file and move or copy the folder directly to your
<blender installation>/2.8x/scripts/addons directory.
2) From the User Preferences window, navigate to the Addons tab, and select the Animation filter.
3) Click the checkbox next to “Animation: Onion Skin Tools” to enable the addon.
4) Click “Save User Settings.”

This is the addon panel. After enabling the addon, you will find this panel in the 3D View > Right sidebar > OST tab.  Familiarize yourself with the following settings.
A quick note: In this documentation, we’ll be verbing the phrase “onion skin” for the sake of convenience. Hope you’re okay with that. 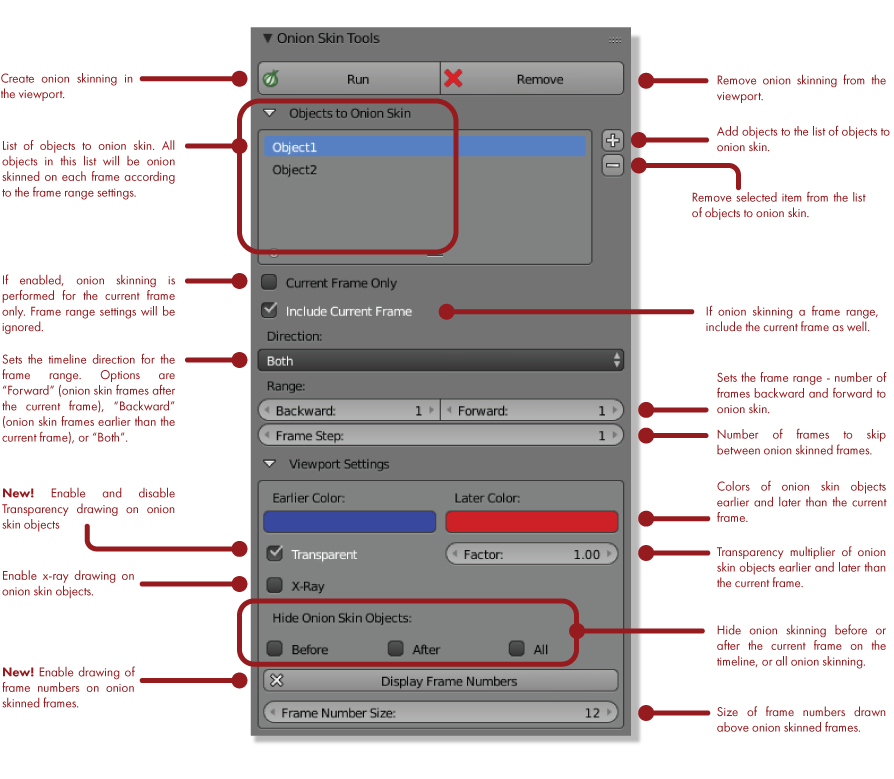 Once you’ve familiarized yourself with the settings, using the addon should be fairly straightforward. Briefly, the steps are:
1) Add objects to the list of objects to onion skin.
2) Adjust frame range settings.
3) Click Run.
4) After animating, click Remove to remove onion skinning from the viewport.

To add objects to the list for onion skinning:

Enable Current Frame Only to run onion skinning on only the current frame. Enabling this will remove several items from the user interface (specifically, the Include Current Frame, Direction, range Backward / Forward settings).

Keep Current Frame Only disabled to run onion skinning on a range of frames.

Enable Include Current Frame to include the current frame in the onion skinning.

Now you can run the onion skinning process by clicking Run.

Settings That Update In the Viewport

The Earlier Color and Later Color properties determine the color of onion skinning objects earlier and later than the current frame. The Transparency Factor slider is a multiplier for onion skinning transparency.

Enabling or disabling X-Ray will enable or disable x-ray drawing on the onion skinning objects.

To remove the onion skinning from the viewport, click the Remove button.

You can onion skin a single frame, then progress forward a few frames on the timeline, and onion skin another frame.  Using the Current Frame Only setting, you can onion skin an arbitrary number of frames individually to maintain control over what you would like to see in the viewport while you animate.