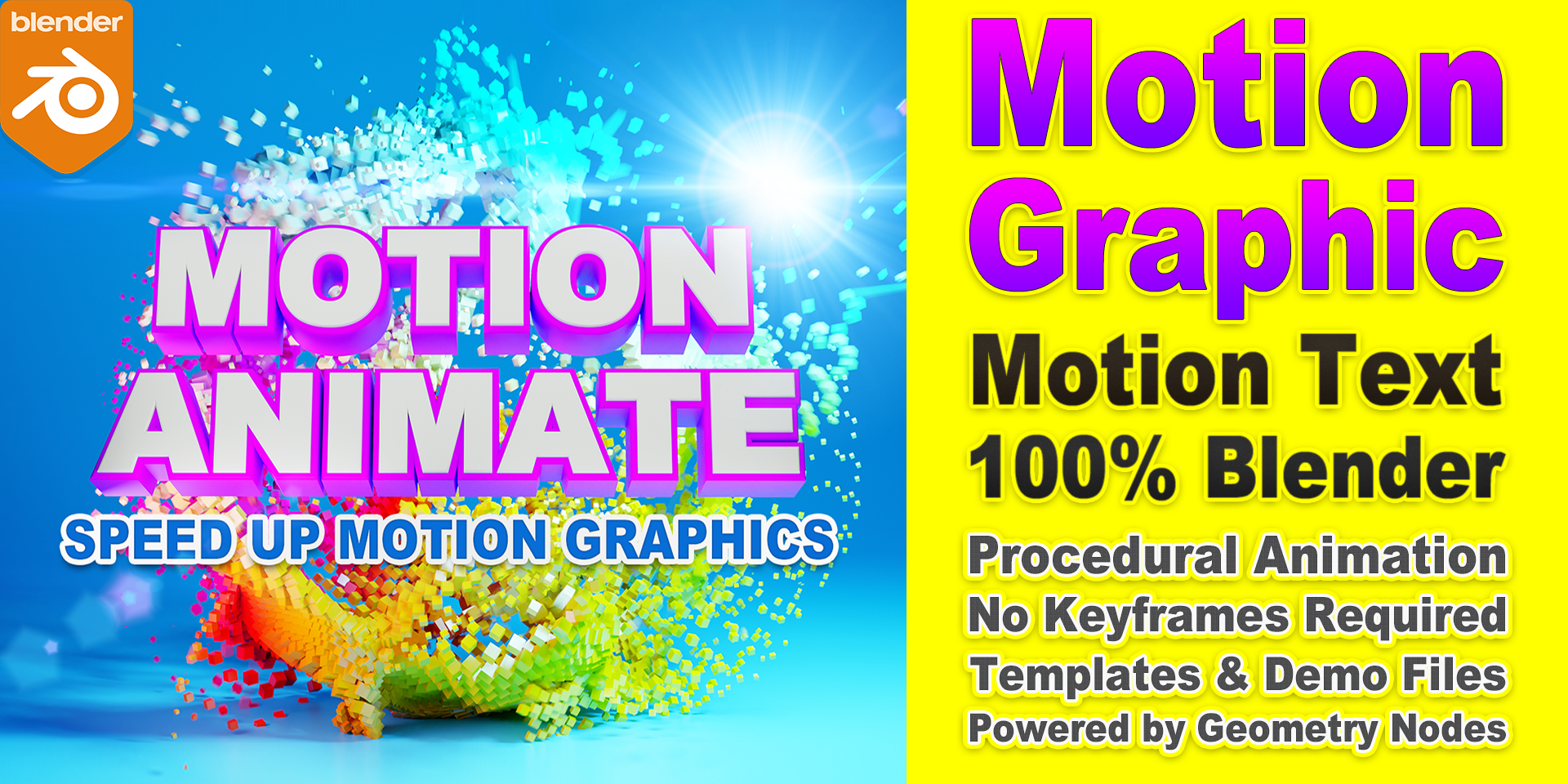 Making motion graphics or motion text in Blender has always been a pain, but now you can do it quickly and easily with Motion Animate. It's powered by Geometry Nodes, which allows you to create procedural animations without keyframes. It not only has node groups for creating procedural animations, but also contains a large number of motion text presets and motion graphic examples. You can drag and drop directly from the template to create motion text animation, it will make your job easy and amazing!

You can learn from the tutorials below, or you can get a better understanding from the demo files.

Motion Controller: Used to control the start and end time of animation, animation speed, smoothness, random and reverse, etc. Recalculate IDs can do ID recalculation for array objects, similar to generated coordinates in materials. which also affects the direction of the animation. Also you can use the distance of the object, or the texture to affect the animation.

Motion Interpolation: 20 animation interpolation presets are built in. You can also choose a preset by ID or random. Control the time stretch and offset of the animation to make a difference in the progress of the later transform animation. The in and out of the animation is also set here. (just add a curve node after it to customize the curve. )

Motion Transform: Set the initial transformation of the animation, you can also use Motion Noise to drive these parameters. You can also fix objects to curve from X axis.

Motion Coordinate: It is mainly used to set the coordinates of the texture. Checking the animation property will automatically generate the animation. The speed and direction are determined by the following transformation parameters.

Motion Noise: Generates random vectors that you can used to drive Motin Transforms.

[Tip] Output properties can works with Easy Texture. (my another plugin).

Motion Text: You can also create motion text directly from assets. You can change the text, start and end times, thickness in the modifier panel. The material needs to be modified in the material editor, default with random color.

[Tip] Motion text templates can also be used on other objects, such as Motion Array, Collection, you may need to check the recalculate ID and set the direction size in Motion Controller.

You will get 40 motion text animation presets in the latest version.

More Demo: Not only that, you will also get 40 demo files.

By the way, You can also use collection from your scene, remember to check Separate Children.

Just add the folder path where this file is located to Asset Libraries, and then save it.

You can get it from Gumroad or BlenderMarket

5 Star Rating Please, Your support is the greatest impetus for us, thank you very much!