by Peter Sandbacka in Models

Subdivision modifier level 2 is enabled for most parts, so this can easily be tweaked if the tank is going to be used as background object. Tank treads are without modifiers to allow use of instancing.

The turrets and Lewis machine guns rotate freely inside their allowed areas. Rotation limitations are set up with constraints which can be changed or removed if needed on Blender's constraints panel.

Textures are in three sets: middle part of the tank, sides (including turrets and Lewis guns), and tank treads. Middle and side textures are 4096px and tank treads are 1024px.
Bump maps are also included and these are used only by Cycles instead of the normal maps. Using the normal maps will result in render artifacts at some camera angles with Cycles. So only LuxRender uses the normal maps.
The tracks are a mix of four mesh pieces with different uv's to get a variation in the texture. Their face and vertex count/position are the same, they only use different object data to allow different uv's. To get the same uv on all pieces change the object data to the desired piece type. 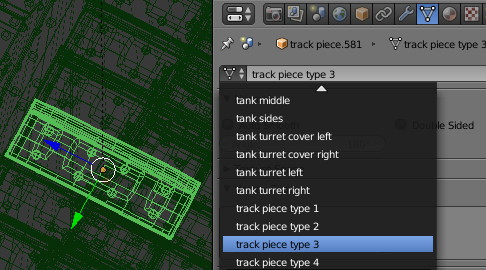