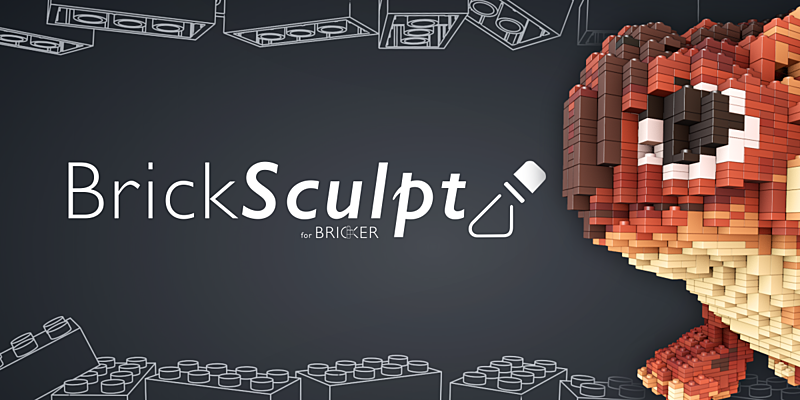 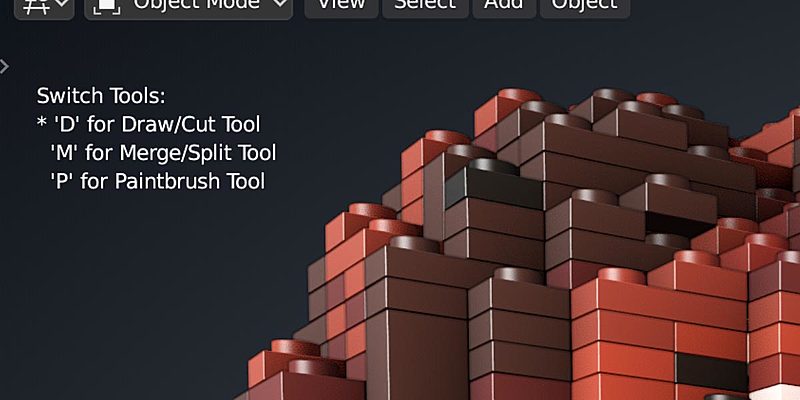 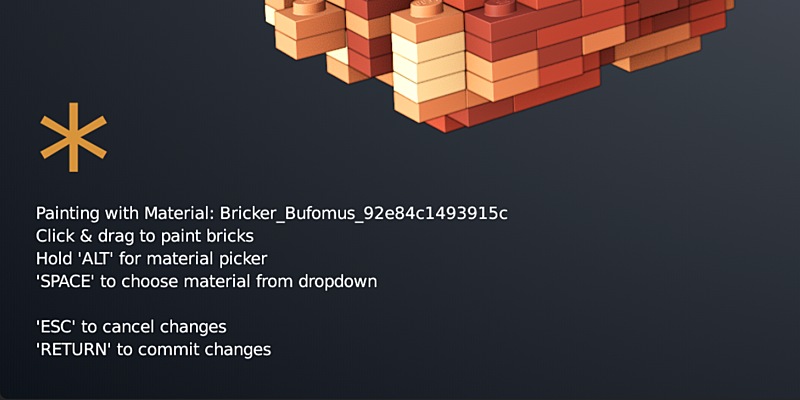 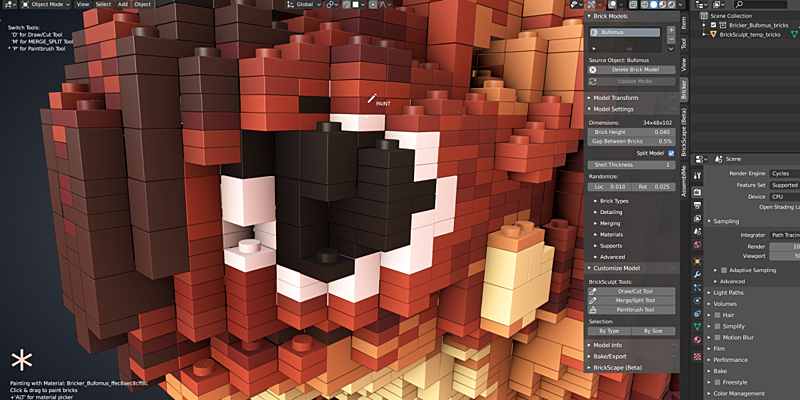 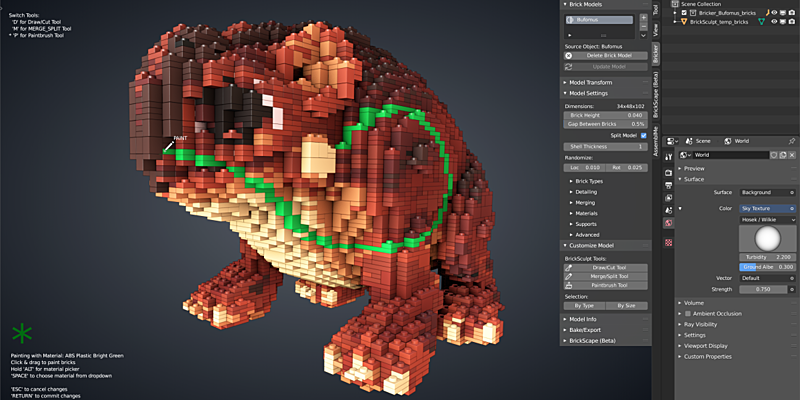 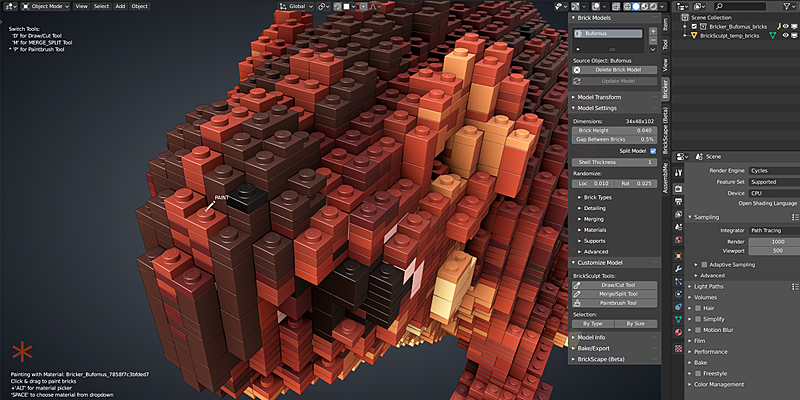 BrickSculpt is an addon for Bricker – a brick modeling and simulation tool for Blender available here on the Blender Market – that brings a whole new interface and toolset for sculpting, painting, and editing the construction of LEGO brick sculptures made with Bricker.

BrickSculpt was designed to take Bricker's powerful brick modeling workflow to the next level – adding a suite of sculpting tools that will streamline the process of tweaking and customizing your brick models after they have been generated.

With this addon, you'll be able to change the shape of your model, edit the model's construction, and paint new materials onto your model with ease. 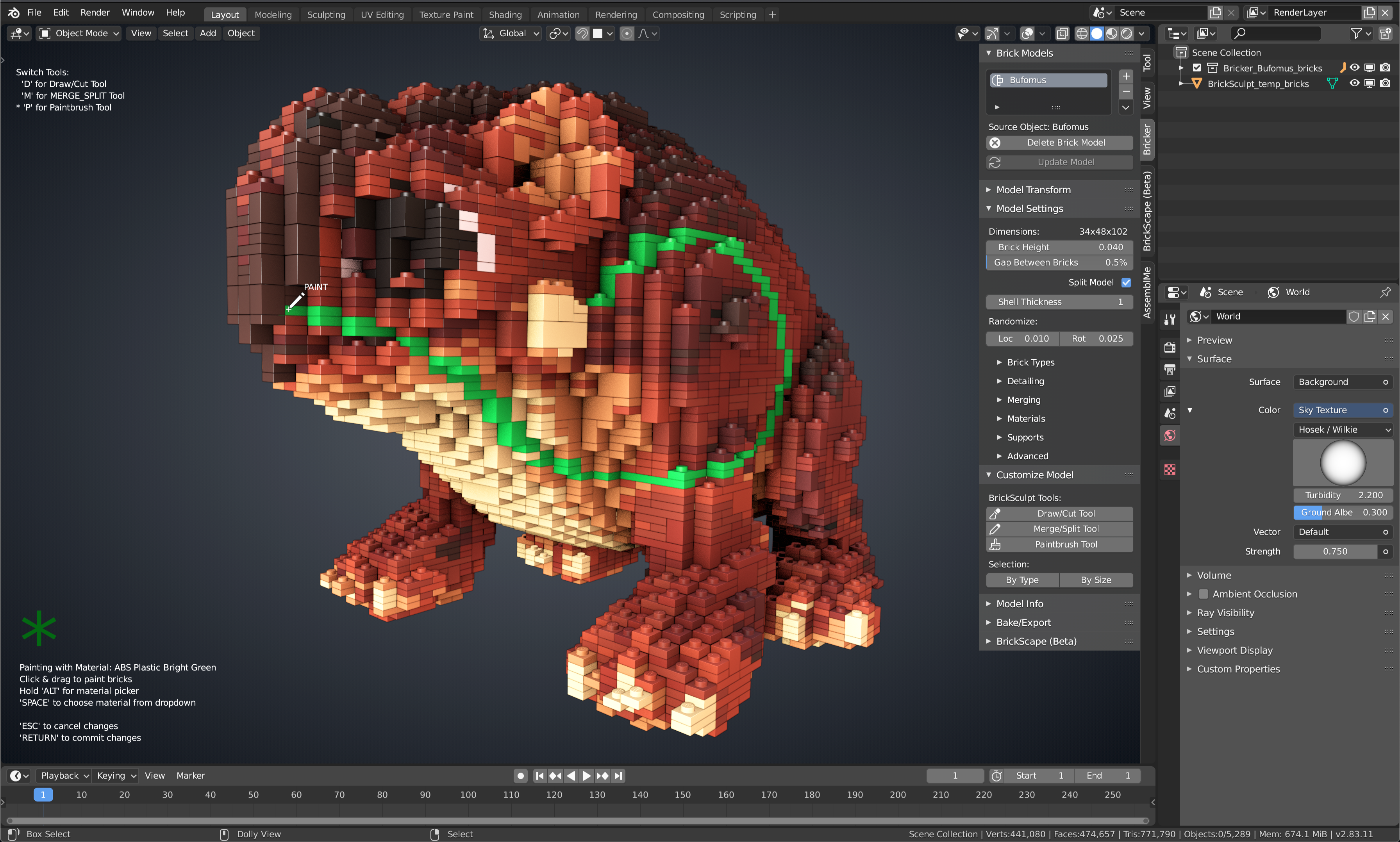 Every adjustment you make is tracked by Bricker, so you can still tweak the model settings, export to LDraw, and more even after customizing the model!

The Draw tool is perhaps the most exciting tool of the lot. With this tool, you'll be able to paint bricks onto your model along the path drawn by your cursor.  This can be a very useful tool for tweaking your model and adding details without the need to adjust the source mesh.

And perhaps the coolest part – all of the bricks you create will be dynamically merged with the rest of the bricks in your model as you draw!

The Cut tool works in tandem with the Draw tool above to complete the shape adjustment experience – with this tool you'll be able to cut bricks out of your model, one plate at a time, regardless of the size of the brick you're cutting into.

BrickSculpt handles all of the messy work on the back-end by dividing the brick into smaller parts and removing the nearest 1x1 plate, behind the cut bricks, so that you have complete control of where the cuts are made.

Just like the Draw tool, all of the affected bricks (including internal bricks revealed by the cut) are dynamically merged together as you work!

If you've ever needed to customize the way that a Bricker model was constructed (maybe you would prefer a 2x4 plate where Bricker chose to place 2x2 plates) , the Merge/Split tool was made just for you.

With this tool, you can merge bricks together and/or split them into individual parts with the ease of a brush stroke to create exactly the customized model construction you're after.

The Paintbrush tool is perhaps simplest and handiest of the tools.  With this brush, you can paint materials onto the surface of your model with precision down to the smallest 1x1 plate, no matter how large the bricks in your model are.

Choose the material(s) from a popup menu, or, if the material you're after already exists on the model, use the Color Picker.  From here you can start painting and switch materials as you work.

Similar to the Cut tool, BrickSculpt will dynamically split and re-merge the bricks as you draw to give you complete control of where the material is painted, down to the smallest 1x1 plate.

NOTE: This is brand new software; we're relying on you to report issues and help us make these tools awesome! You can contact us anytime via email ([email protected]) or the Blender Market inbox.

A Note from the Developer

I could not be more thrilled to release this software to you all.  It's been in development off-and-on for a few years now, but I wanted to be sure it was done right, and that it was powerful enough to amaze you, before releasing it.

A huge thank you to all of the wonderfully talented users of the Bricker addon and its counterparts – many of whom have waited patiently for this software for some time.  You all inspire me to continue creating these software tools, and to implement features you'll love into the ones you're using.  I hope you continue sending your creations my way so I can continue to be inspired and share your creations with others.

This is just the beginning! BrickSculpt has a bright future with many new features on the horizon – all of which are influenced and inspired by your feedback!  Below are the features in development right now, with many more to surely come: