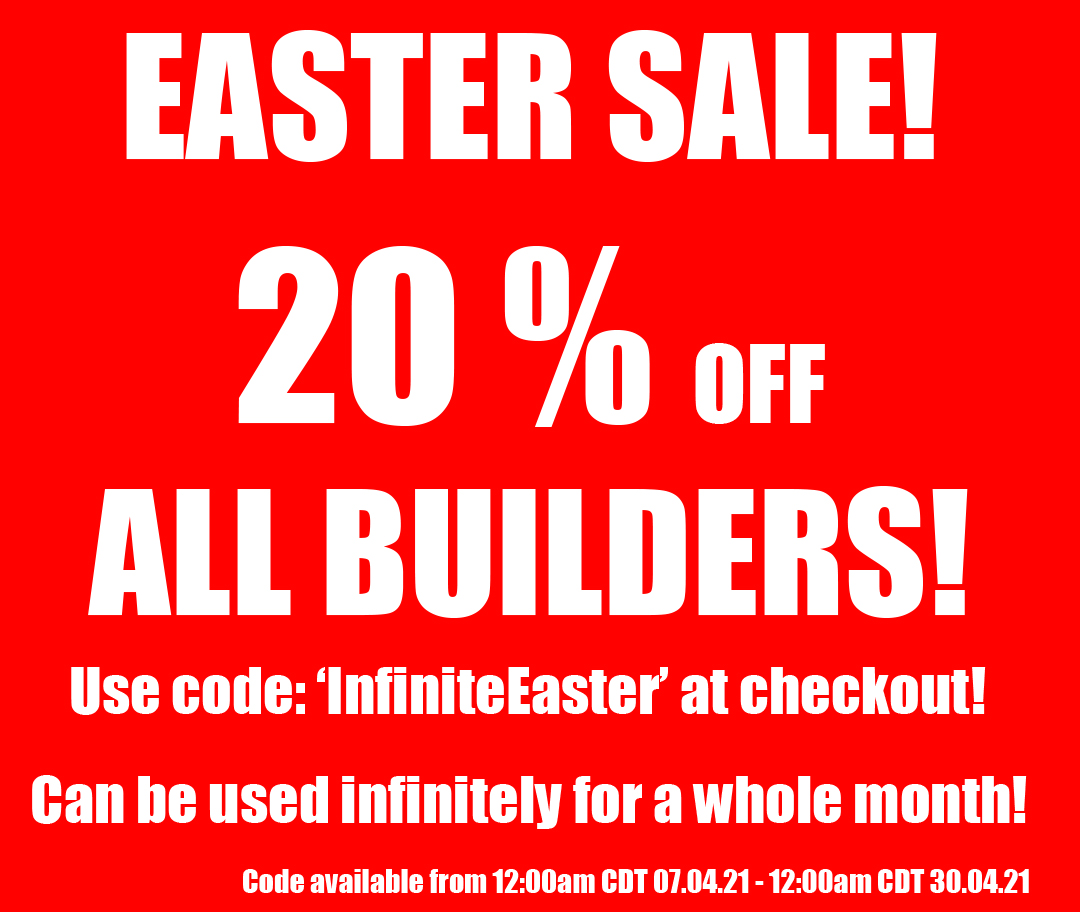 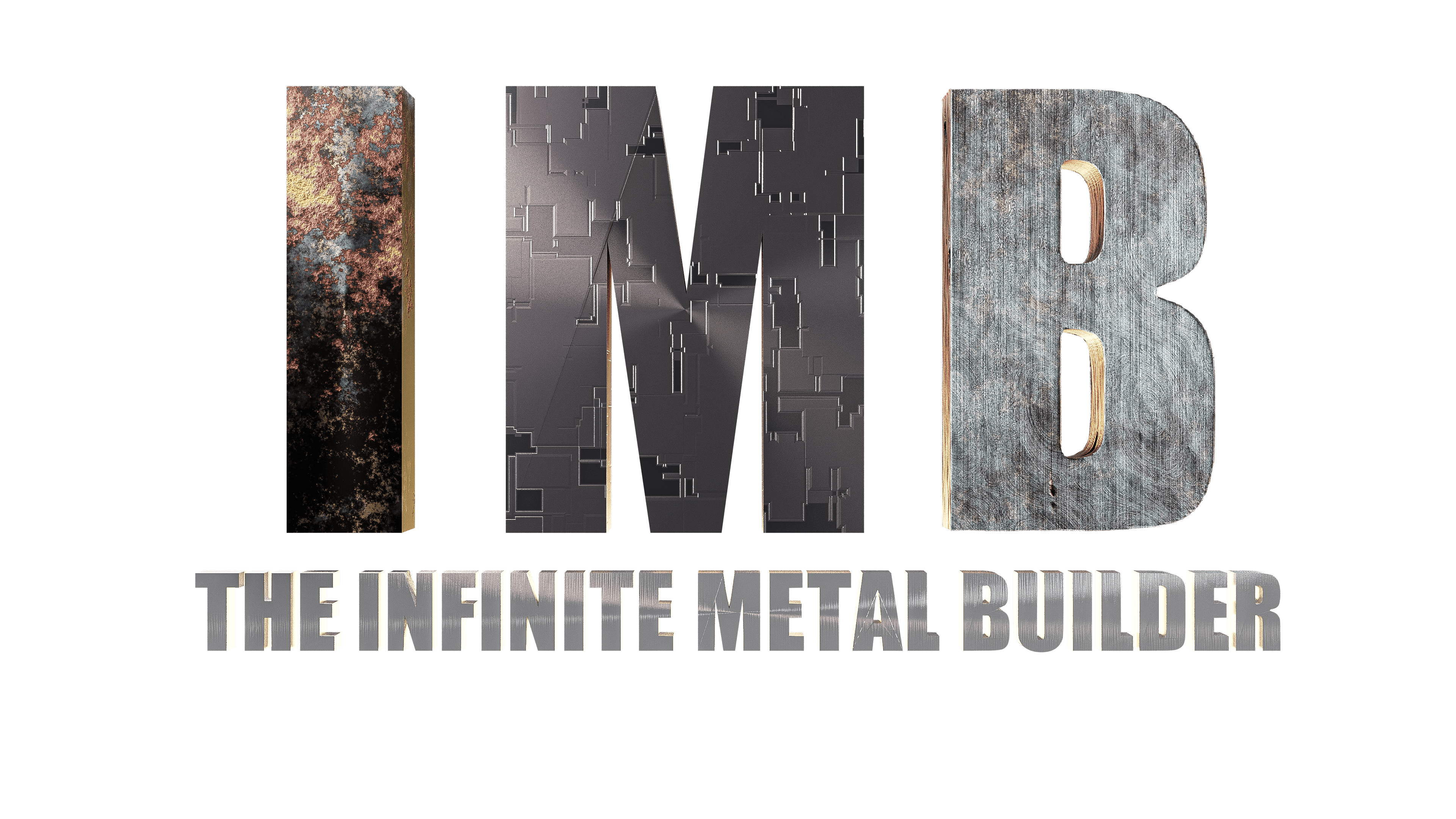 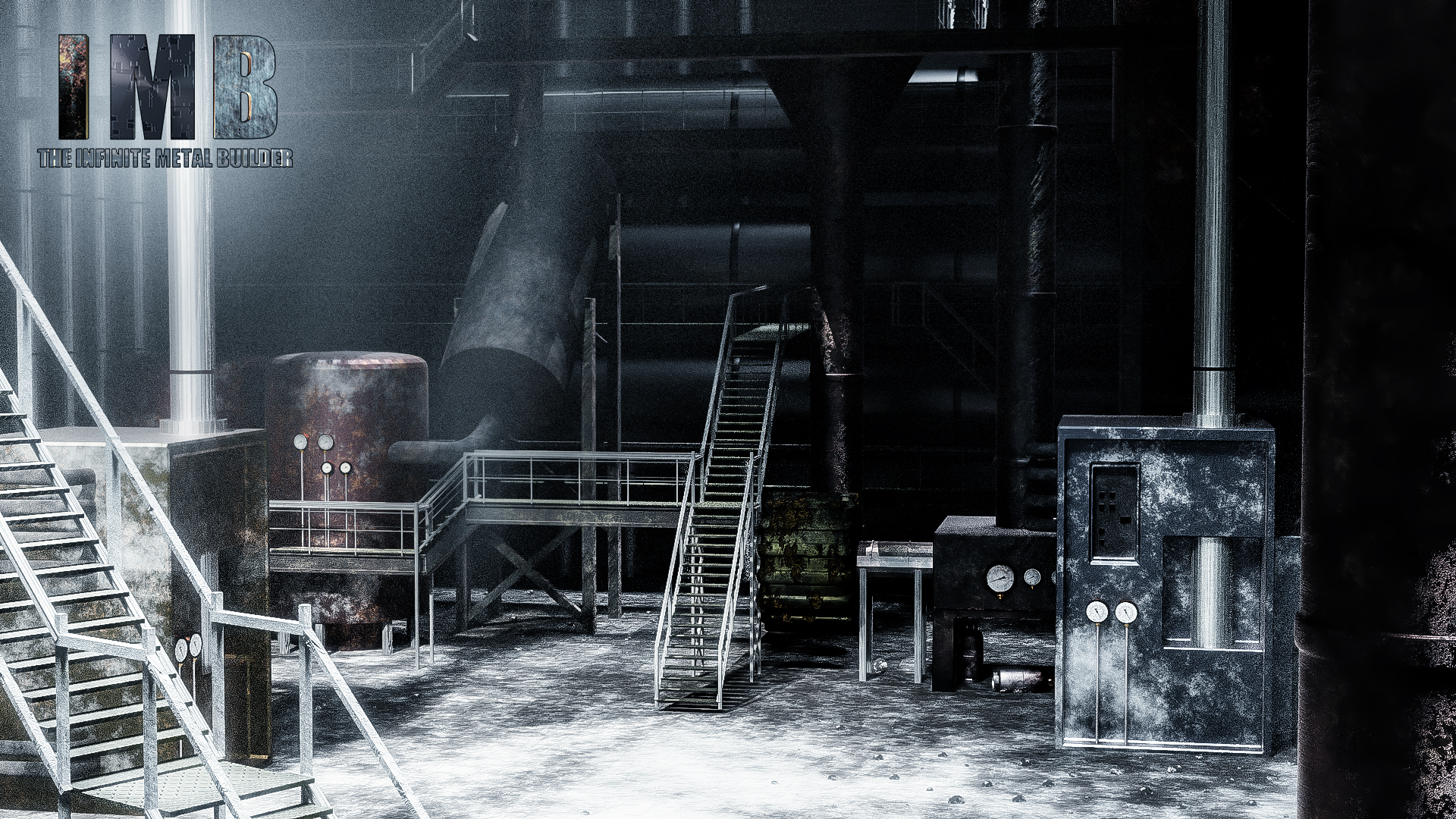 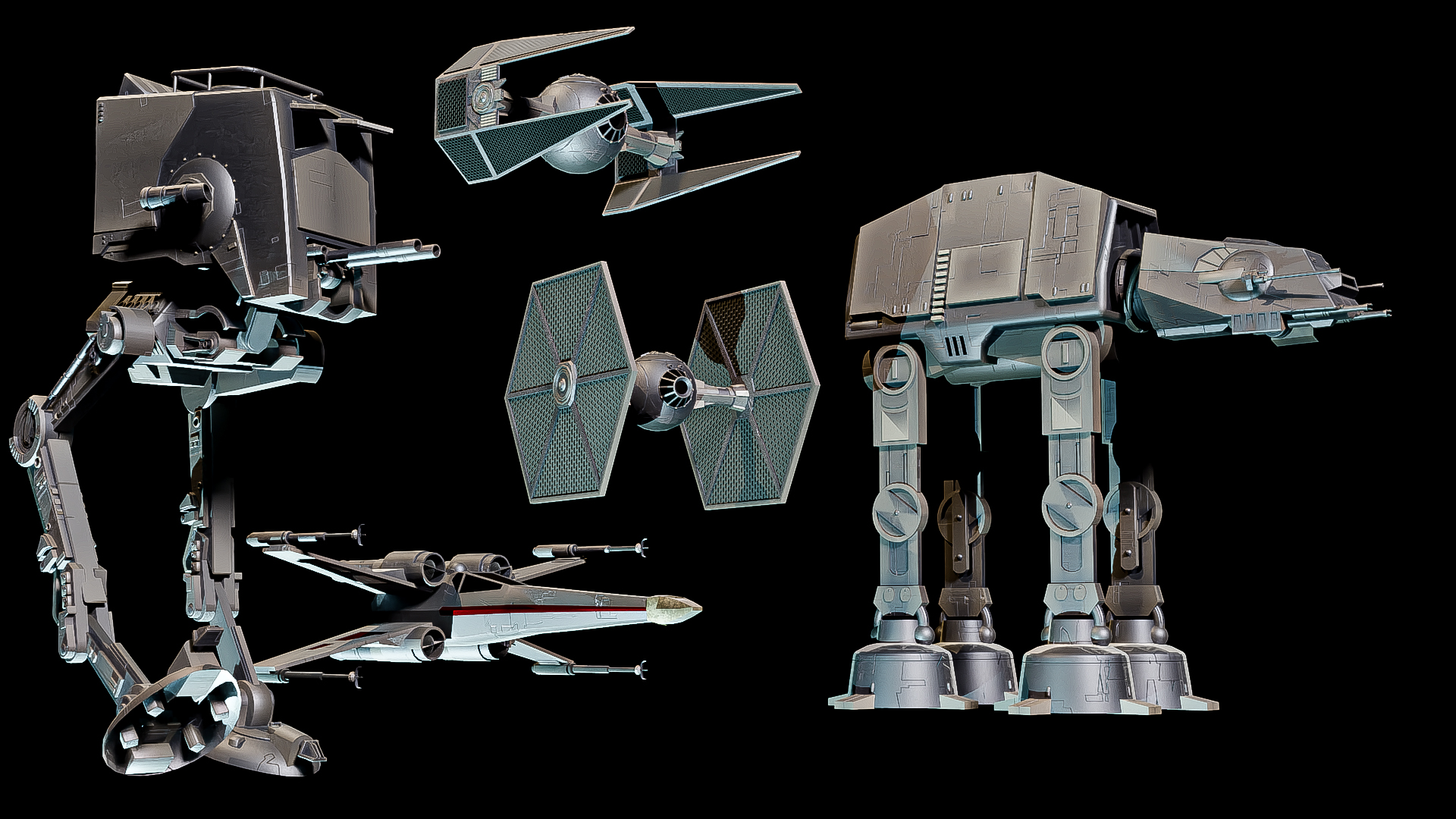 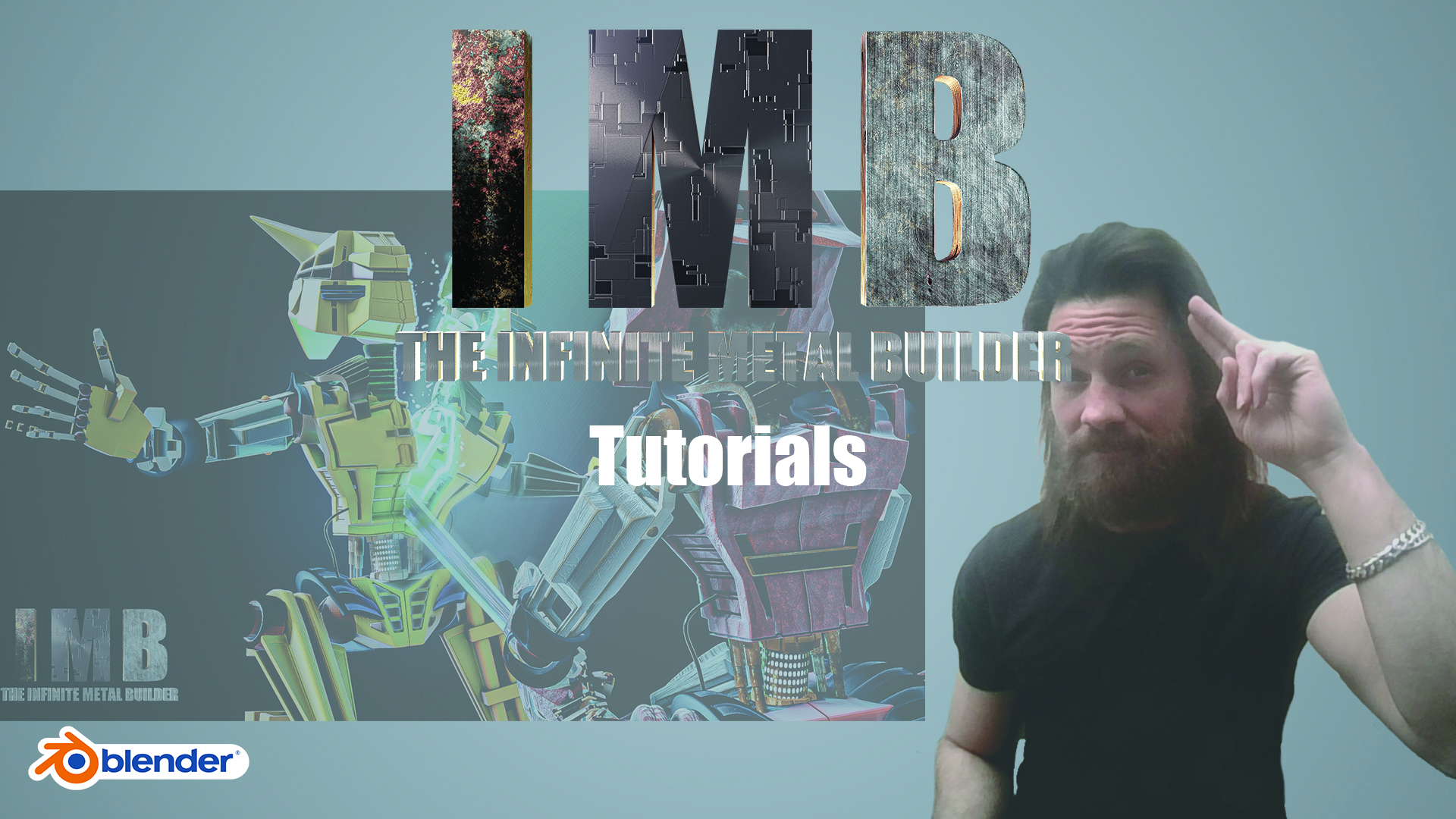 Finding the exact kind of metal you need for your model can be a tiresome search through endless RGB textures, some are close to what you need, but aren't quite there without a bit of extra node trickery. When you find one, say a 4K texture, it'll likely use close to a gigabyte of memory, which to me seems a needless waste for a texture that requires no subdivisions or displacement and once I put a couple of different textures into my scene, not only is scaling them a problem, but also how much memory just a few RGB textures can eat up.

This is where The Infinite Metal Builder shines. Yes, that was a pun. In the image above, the only surface that isn't the IMB is the floor and stones which are using The Infinite Rock Builder, minus the displacement. You can create an endless amount of different metals that suit your needs a lot quicker than hoping there's an image out there. Because it's all procedural, it'll tile seamlessly and it'll use between roughly 40 to 85 mb of memory, which frees up almost 95% for other areas of the scene. So not only is creating a huge rusted factory wall without repetition as simple as changing a couple of values, but you also have a ton more memory to work with than if you'd used an RGB texture.

If you're new to Blender, that's fine, don't be intimated by the controls as you can still get the best out of The IMB because it's mostly experimentation with the controls. Sliding sliders about, changing a few values, that's all the input required so you can see changes very fast just by moving a slider.

The below image was created using the IMB for every visible surface using various different setups. It makes for much easier and quicker working than applying tens of different RGB textures. 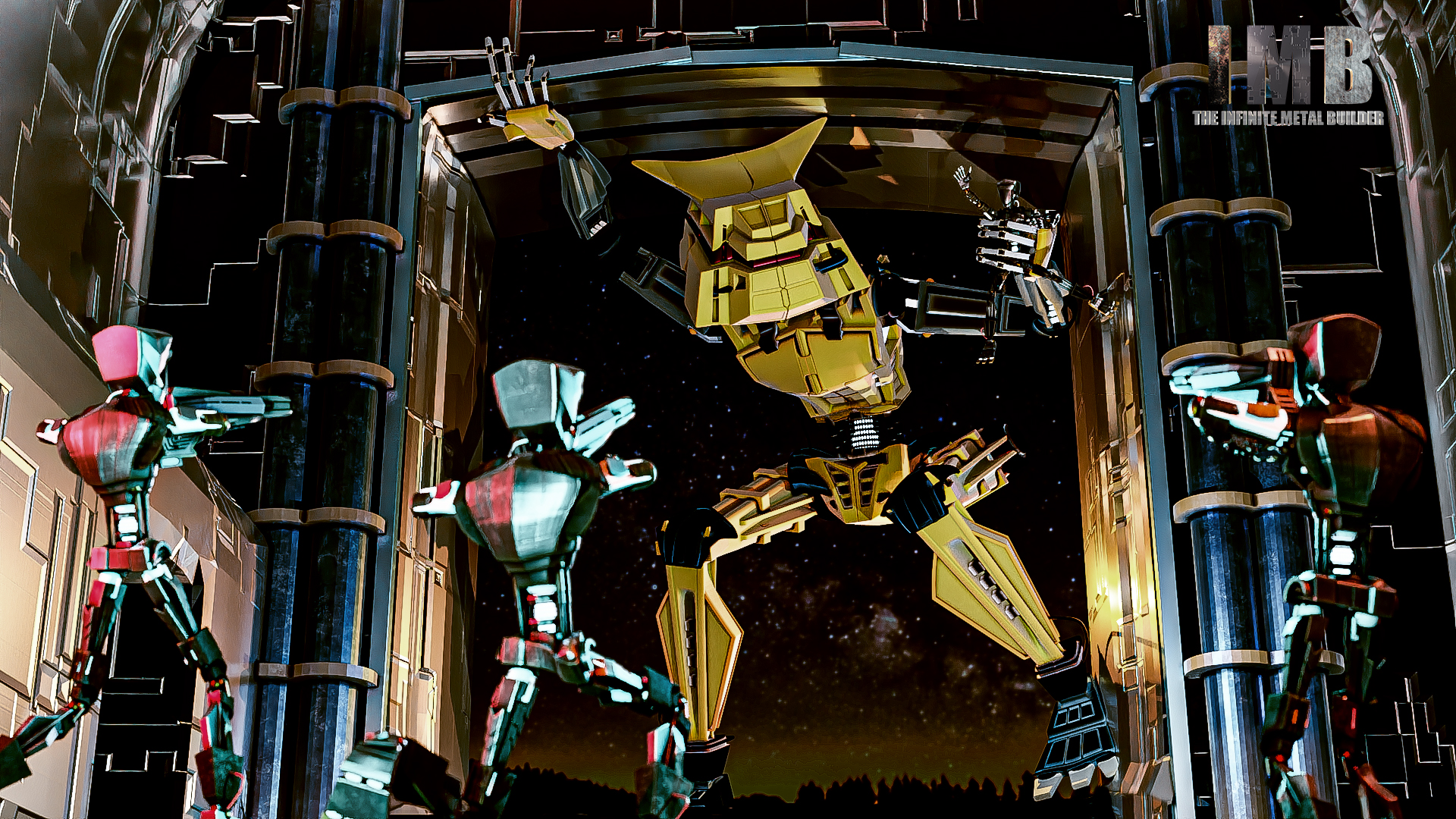 There are 9 different bump effects, including a set up for your own custom scratch or bump maps, 5 different displacement effects, PBR or Anisotropic controls, colour filters, and 4 different metal presets, all of which can be mixed to your hearts content to create totally different metals with ease. 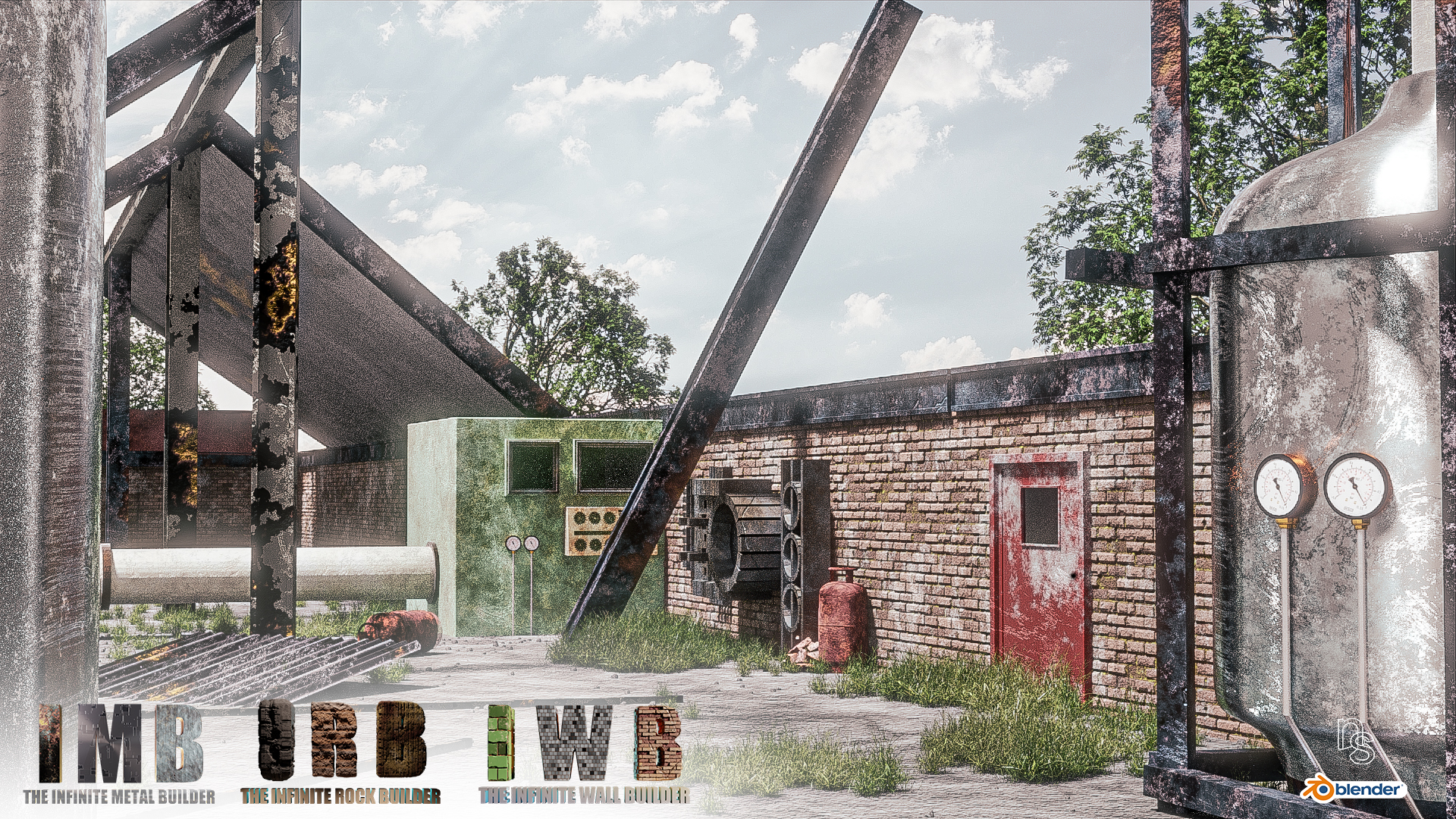 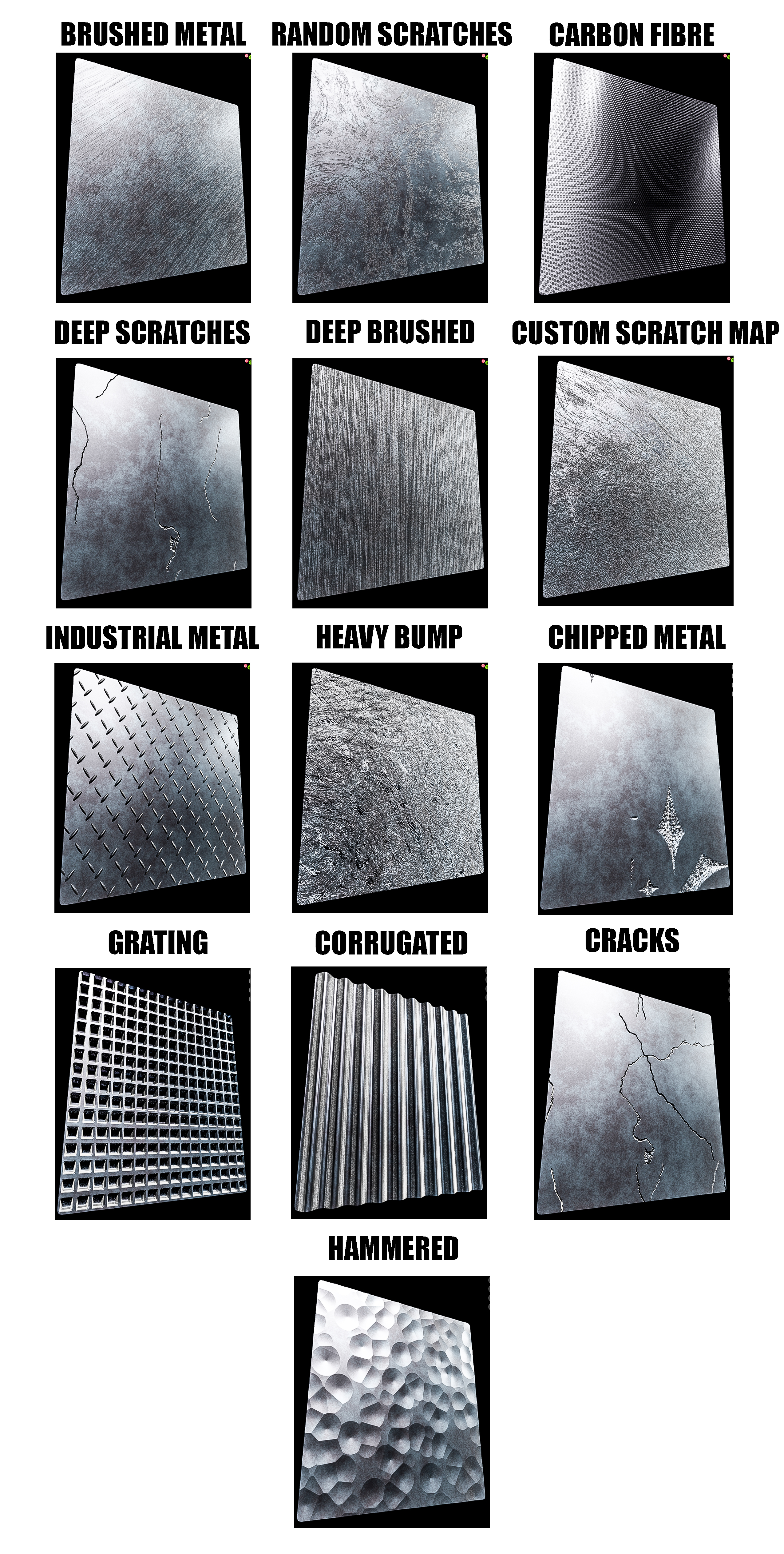 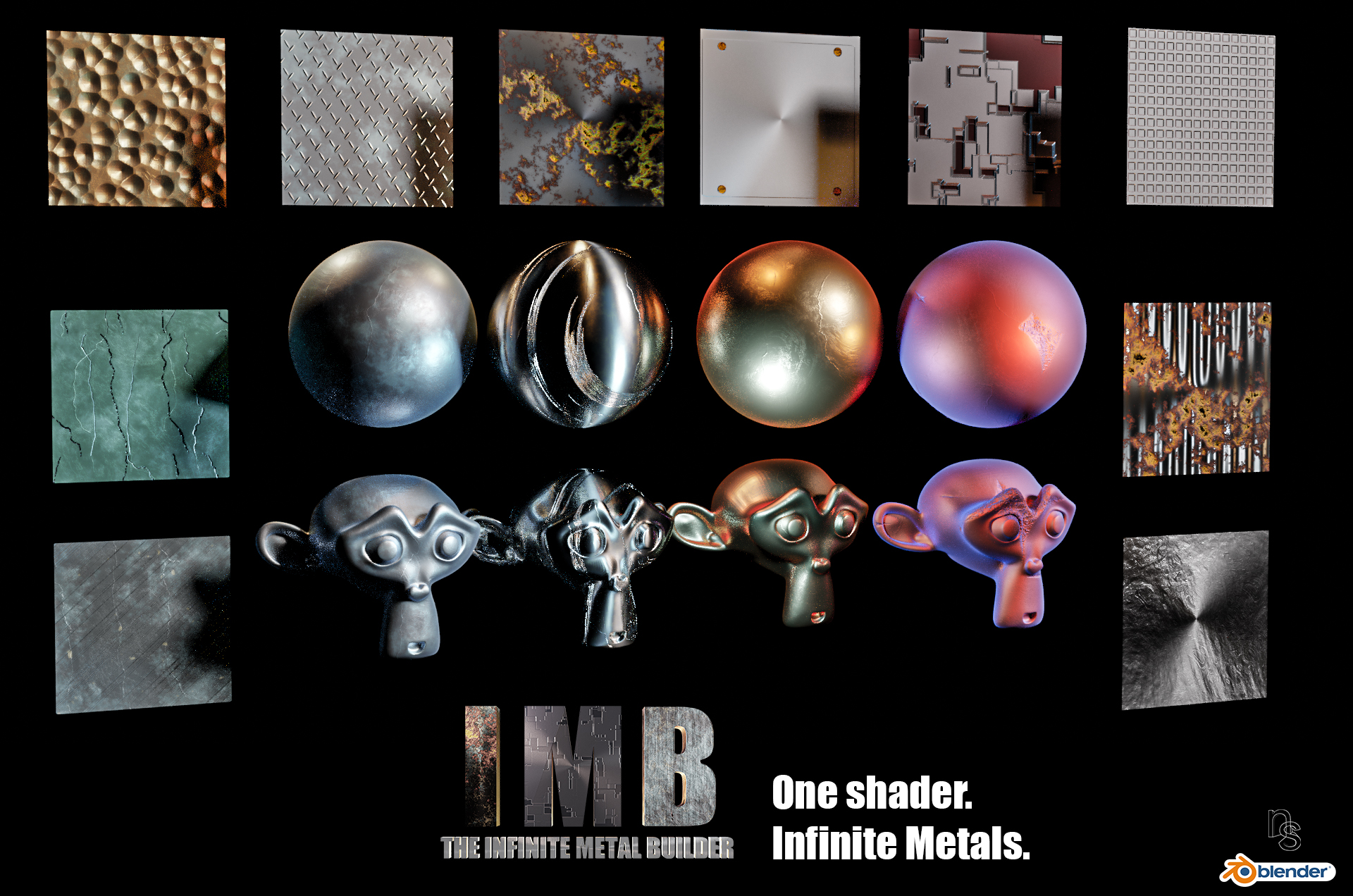 The above image displays just a few examples of what can be created with the IMB, each one takes less than a minute to create because the controls are very simple to use, you'll likely recognise all of them and it's very fast. 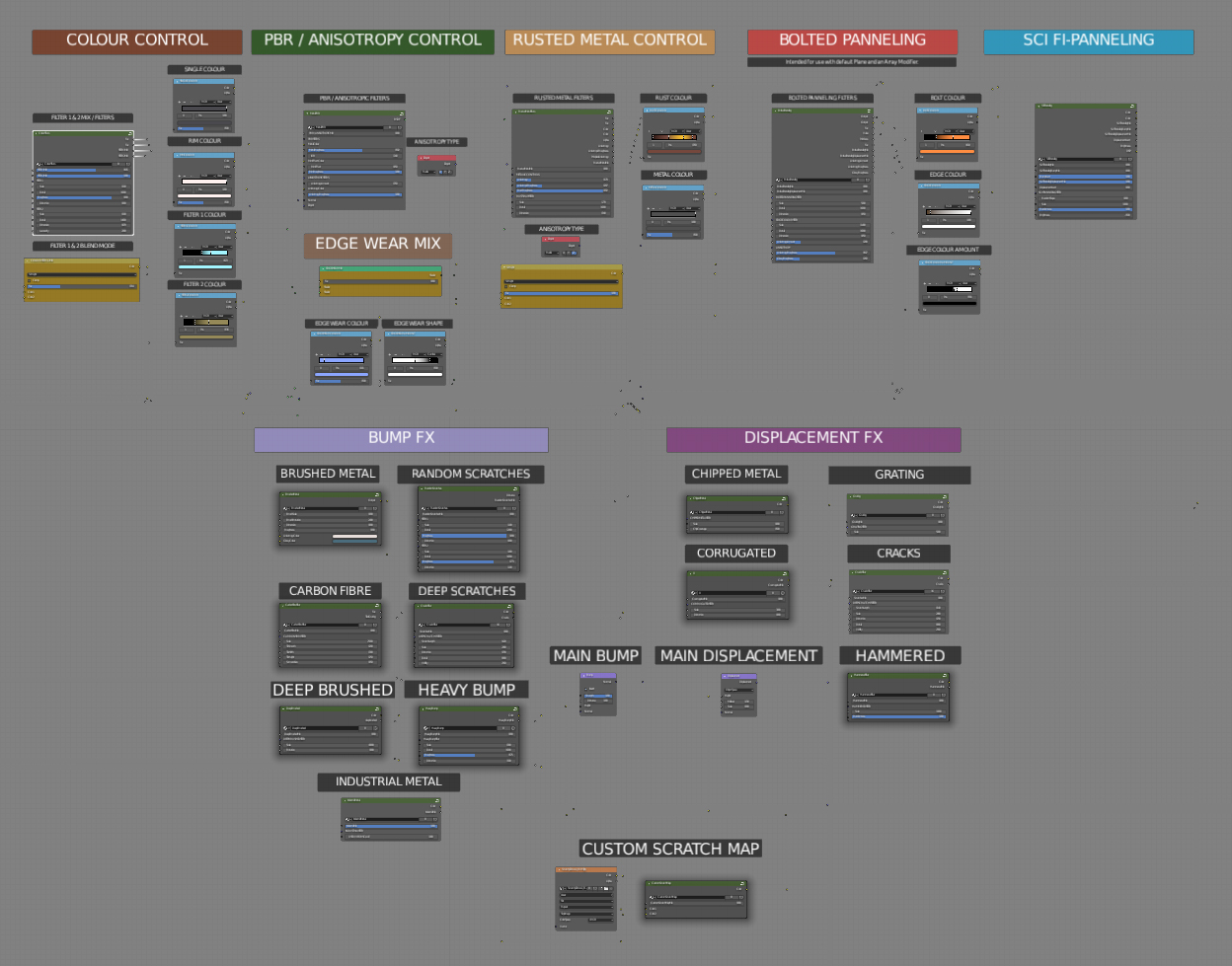 There's a mixture of mainly node groups with a few mix sliders, colour ramps and value inputs, that's the lot. If you've used Blender before, you've likely used all of these nodes before and if you haven't, they're all clearly labelled and each control is covered in the pdf manual with many visual examples and also the tutorial series, which I'll be recording shortly. 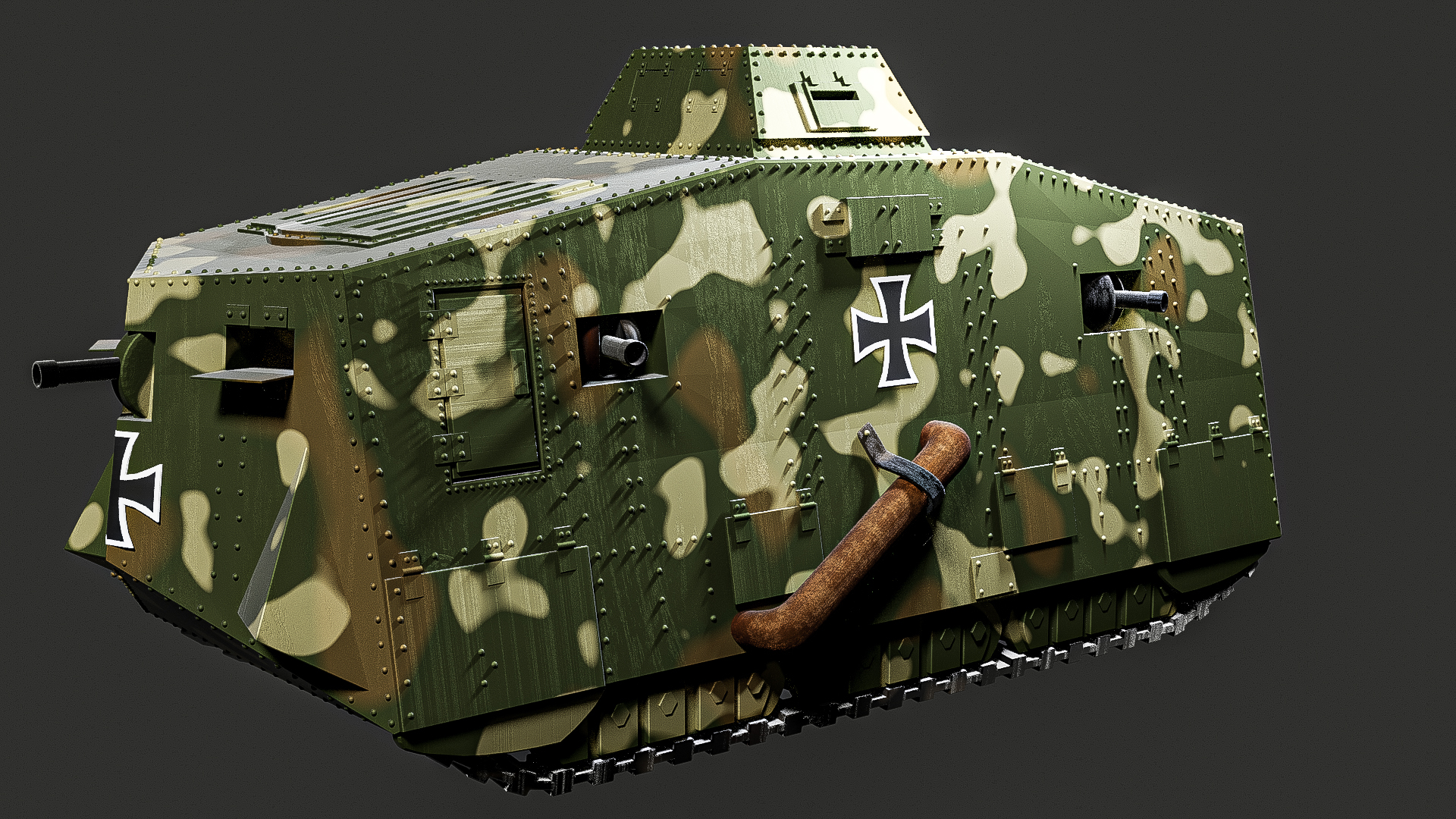 Using the colour filter FX, patterns like this camouflage can be easily created.

In the downloads section, you'll find The Infinite Metal Builder Blend file, a visually based manual, a PSD with 3 scratch maps you can fiddle with and 3 custom scratch maps I already built ready to be plugged into the Custom Scratch Map nodes. You also get a Blend  file with the Star Wars models you see below. They're not rigged, though they are parented to allow for posing. 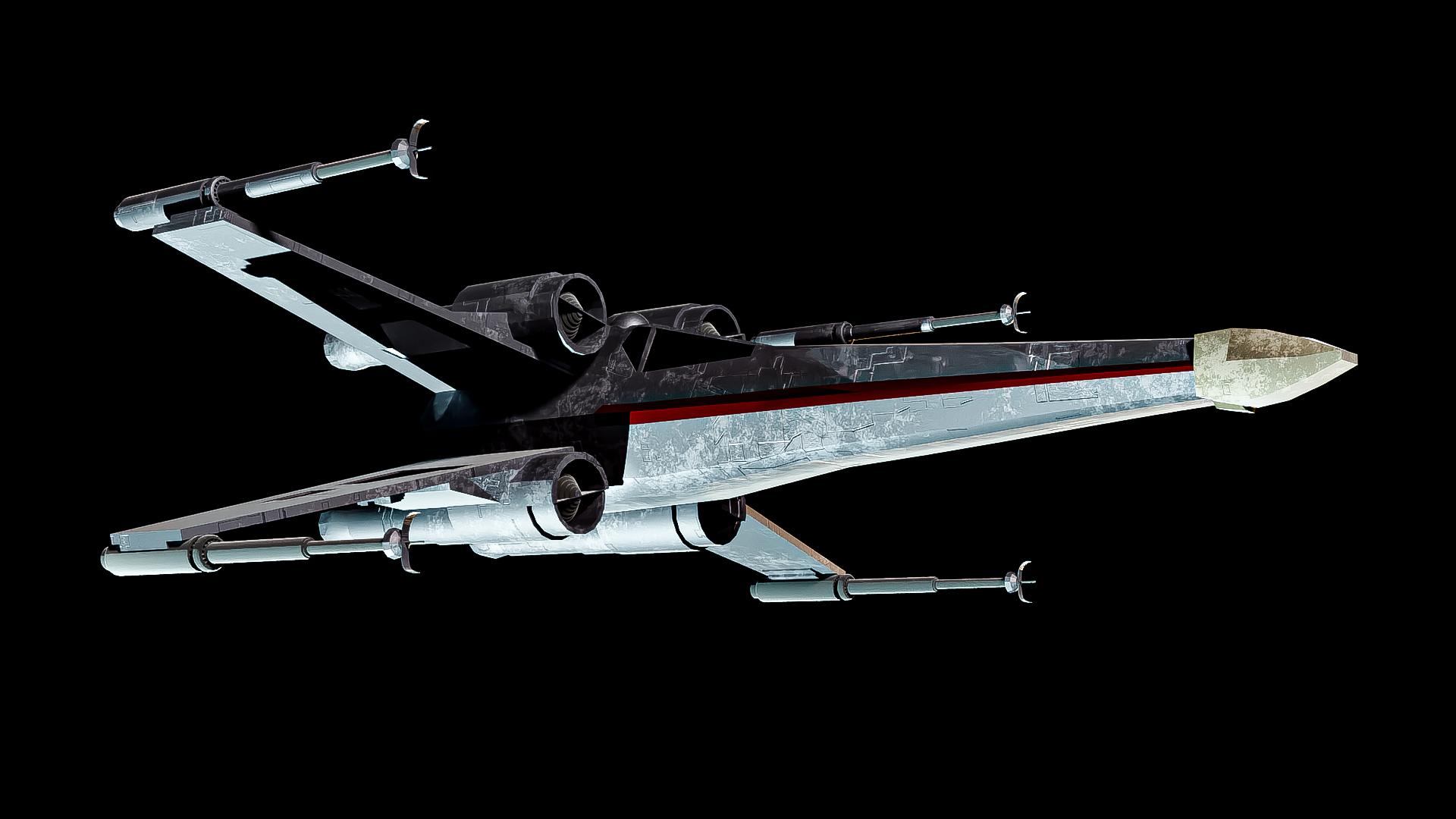 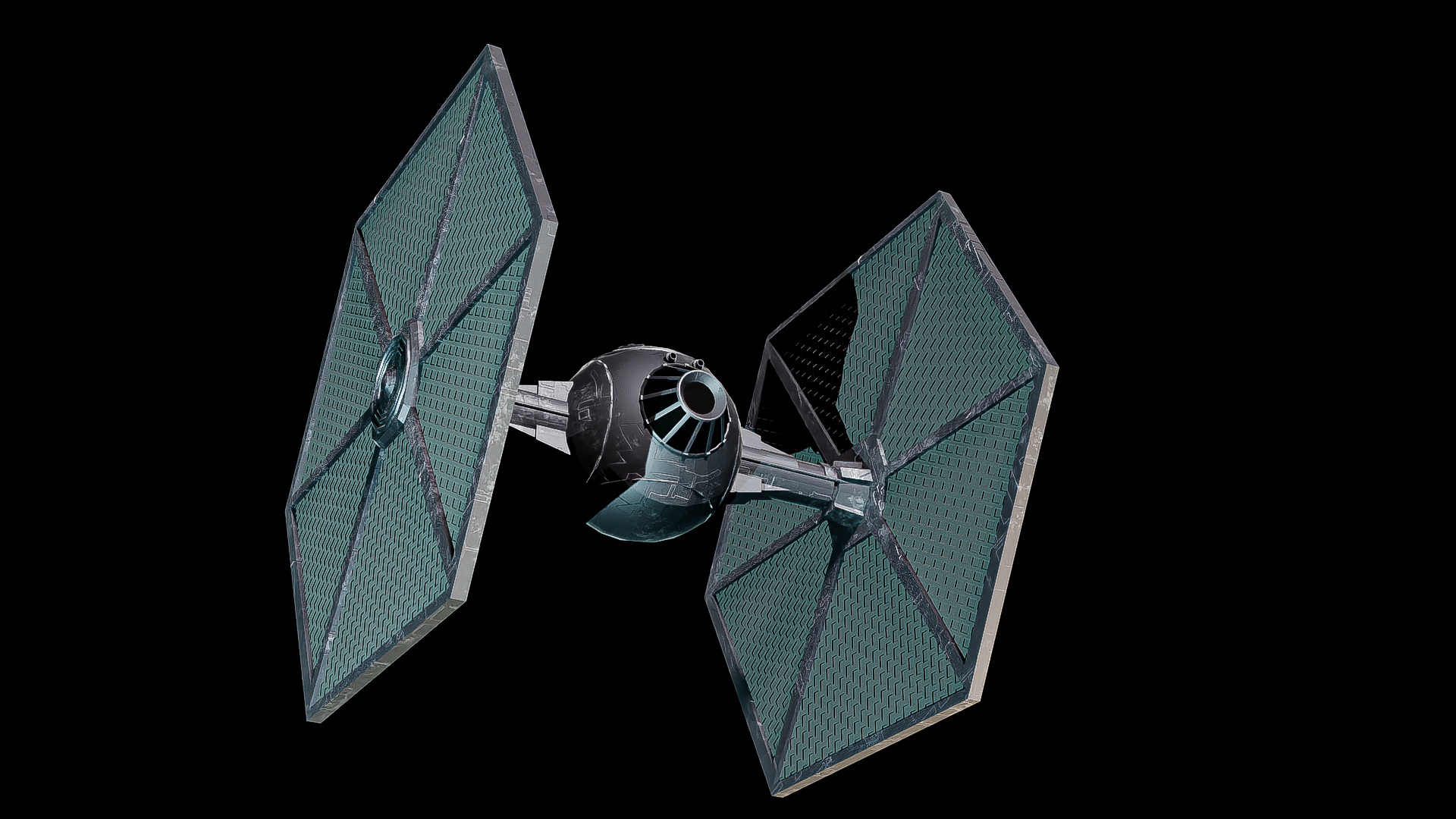 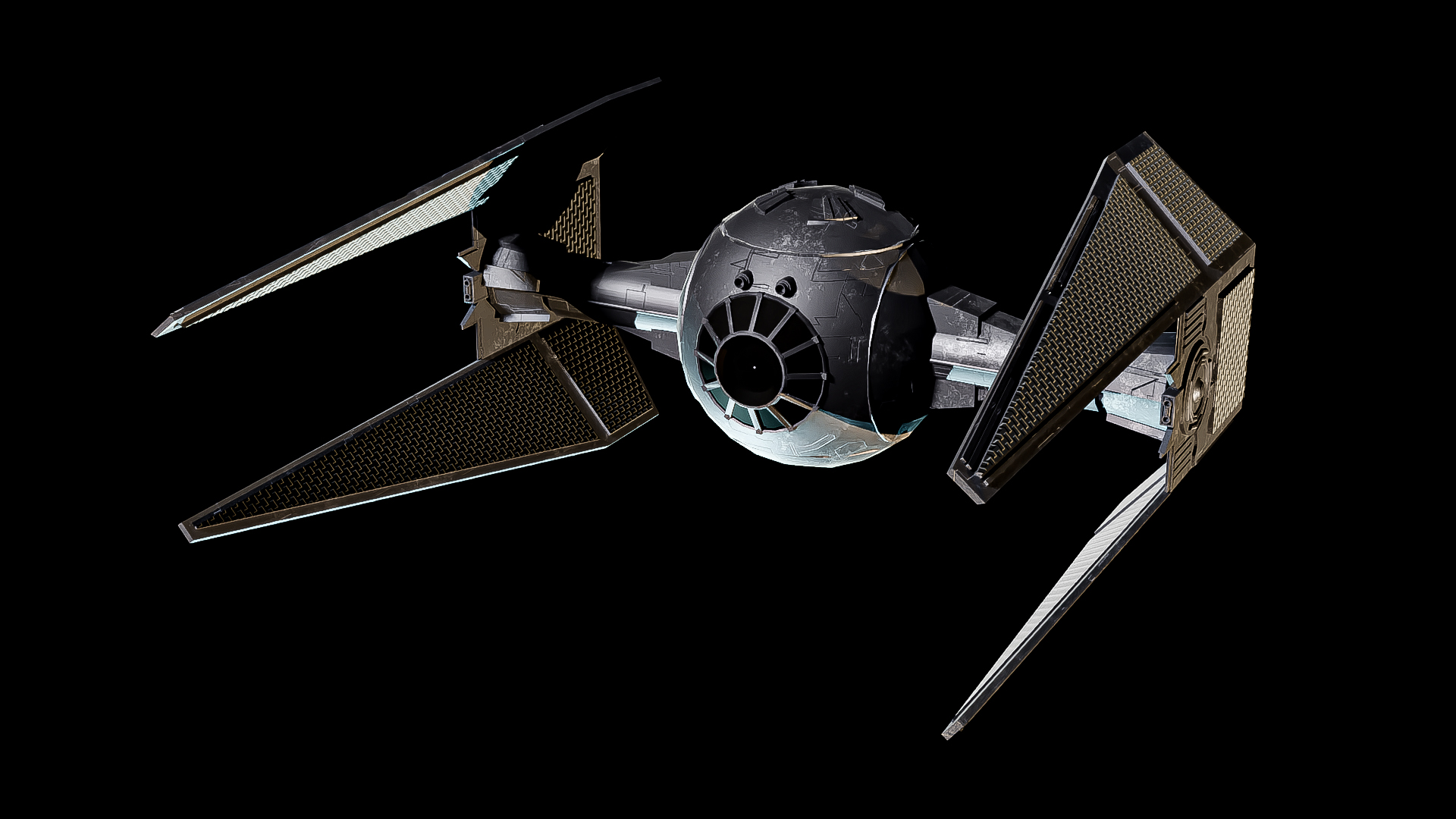 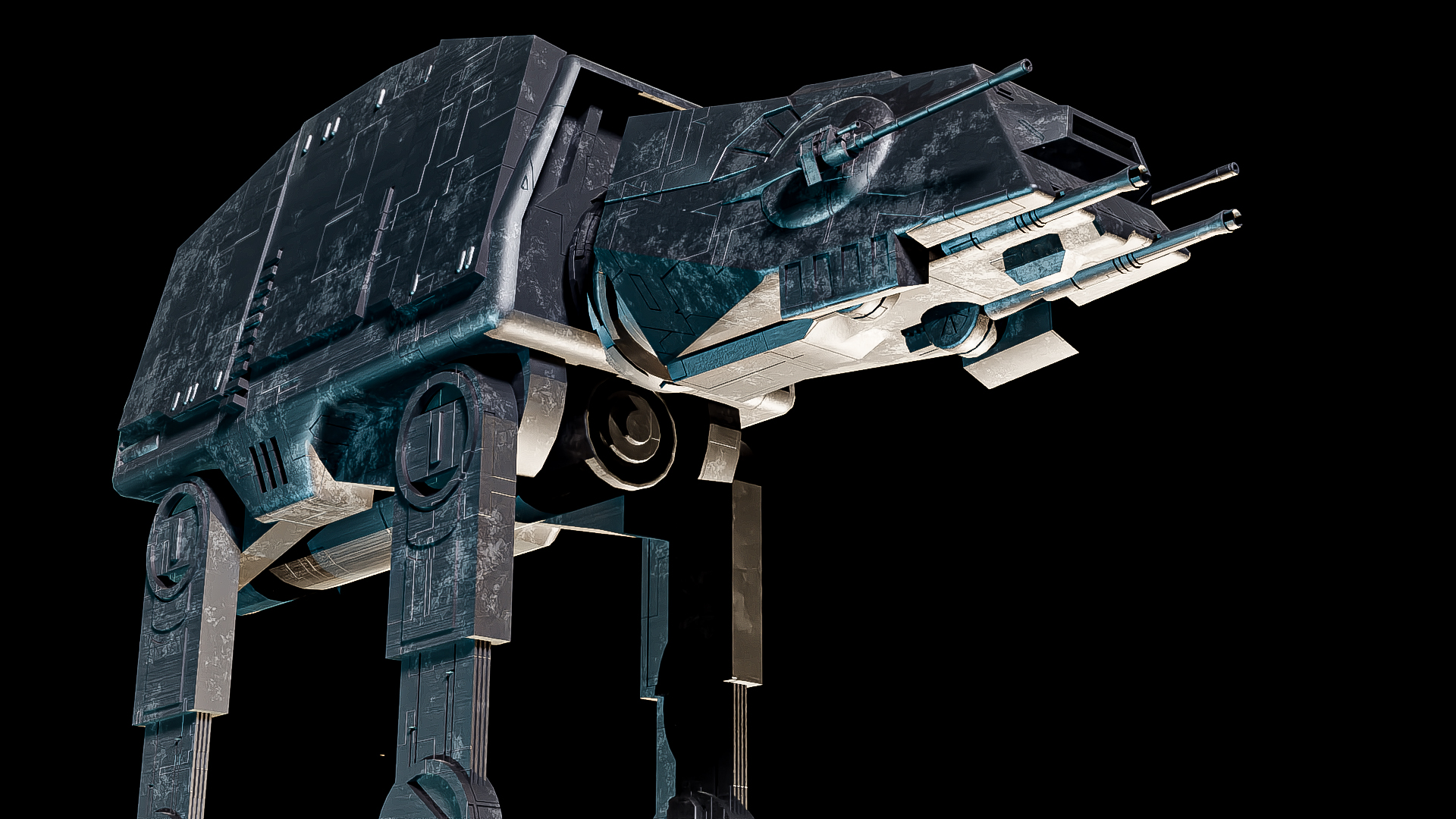 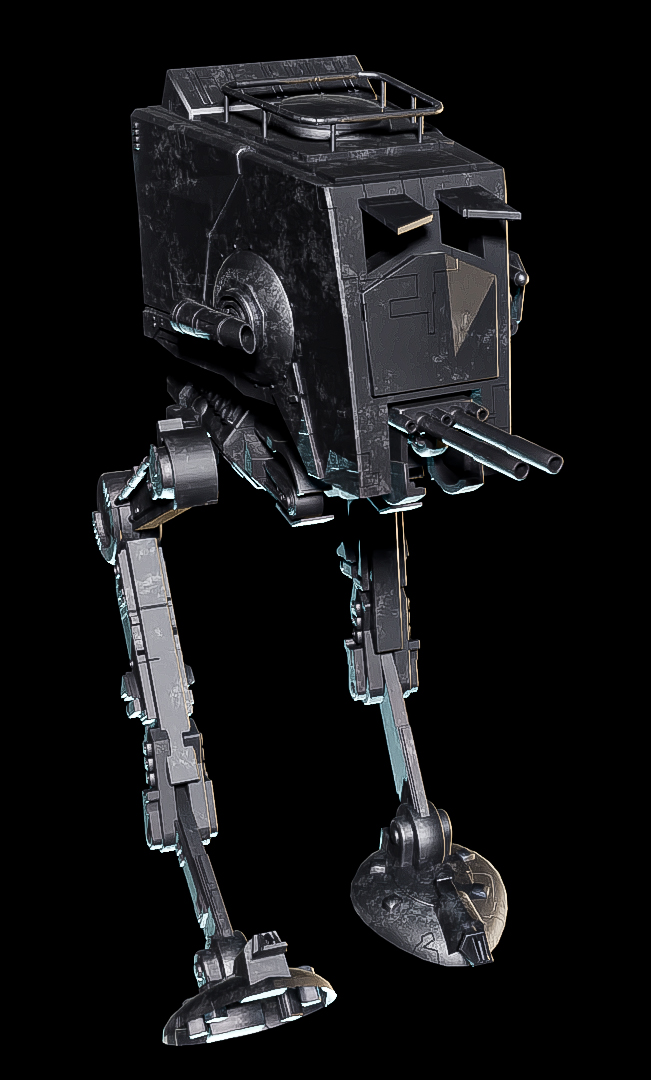 Just to let you know that I've added  new effect to the IMB, bringing it up to v2.1. It's an effect intended to be used to dirty-up the metal in the corners of the geometry. The below examples show it when mixed in, the left without and the right with it mixed in.

There's a couple of other minor changes, not worth going into as their reasons are obvious. I've also added a Reconnect node so if you CTRL+SHIFT click any of the node groups to check the effects, CTRL+SHIFT Click the 'Reconnect Here' pip.

That's it for now, there'll be other improvements as and when I find them. I've put the latest version 2.1 and the updated manual in the downloads.

As usual, any issues or problems, please let me know.

I've added some custom colour control so that you can use Texture Paint to add your own designs or colour. The nodes are already set up, you just need to select one of the premade texture slots in Texture Paint, do your painting and use the mixers to mix them in. It's explained in the latest manual which is in the downloads along with the latest IMB v2.2. The attached picture is with and without texture paint. 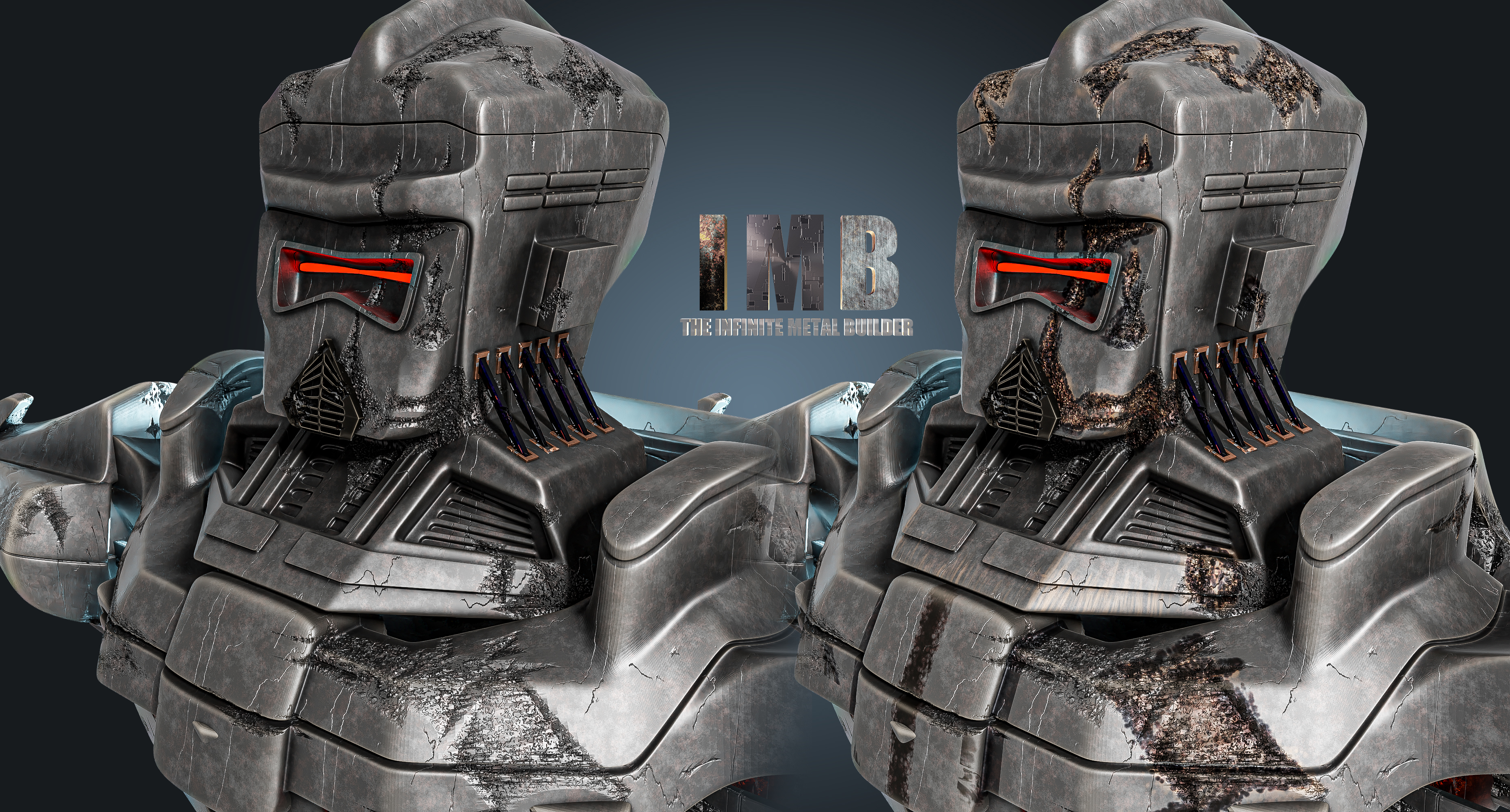 I've started creating tutorials for The Infinite Surface Builder and I intend to do the same for all of the builders. The videos and tutorials for this one are all using a much older version so the tutorials will likely clear anything up. Thank you for your patience with this, the tutorials just took a back seat whilst I updated all of the builders. I expect to start on them next week, once I finish the Infinite Rock Builder tutorials. Hopefully everything will be done by the end of the week.

***Some of the models in these images and the download are not affiliated with or endorsed by the original copyright holders. They are my own creation, modelled in Blender.