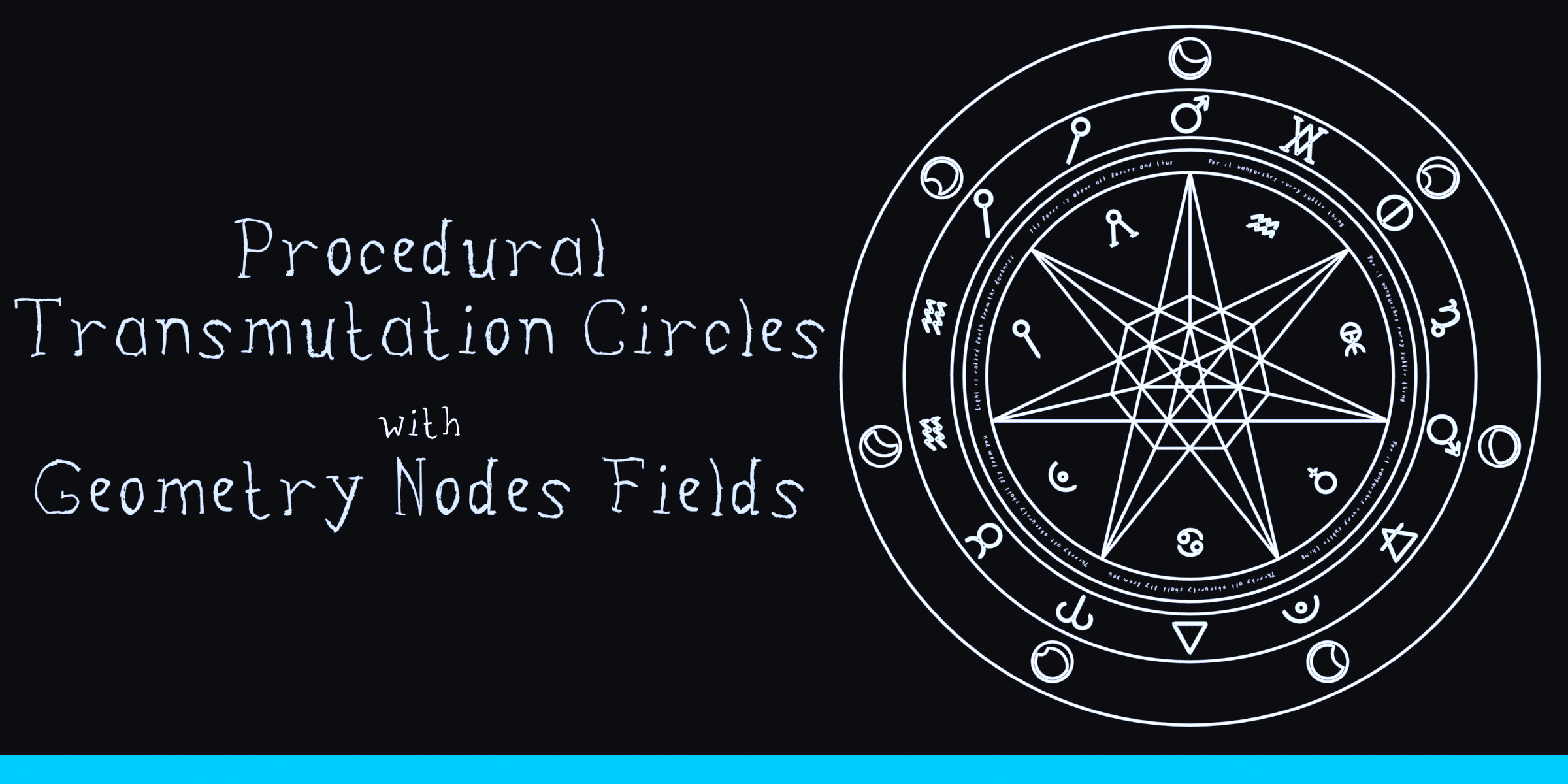 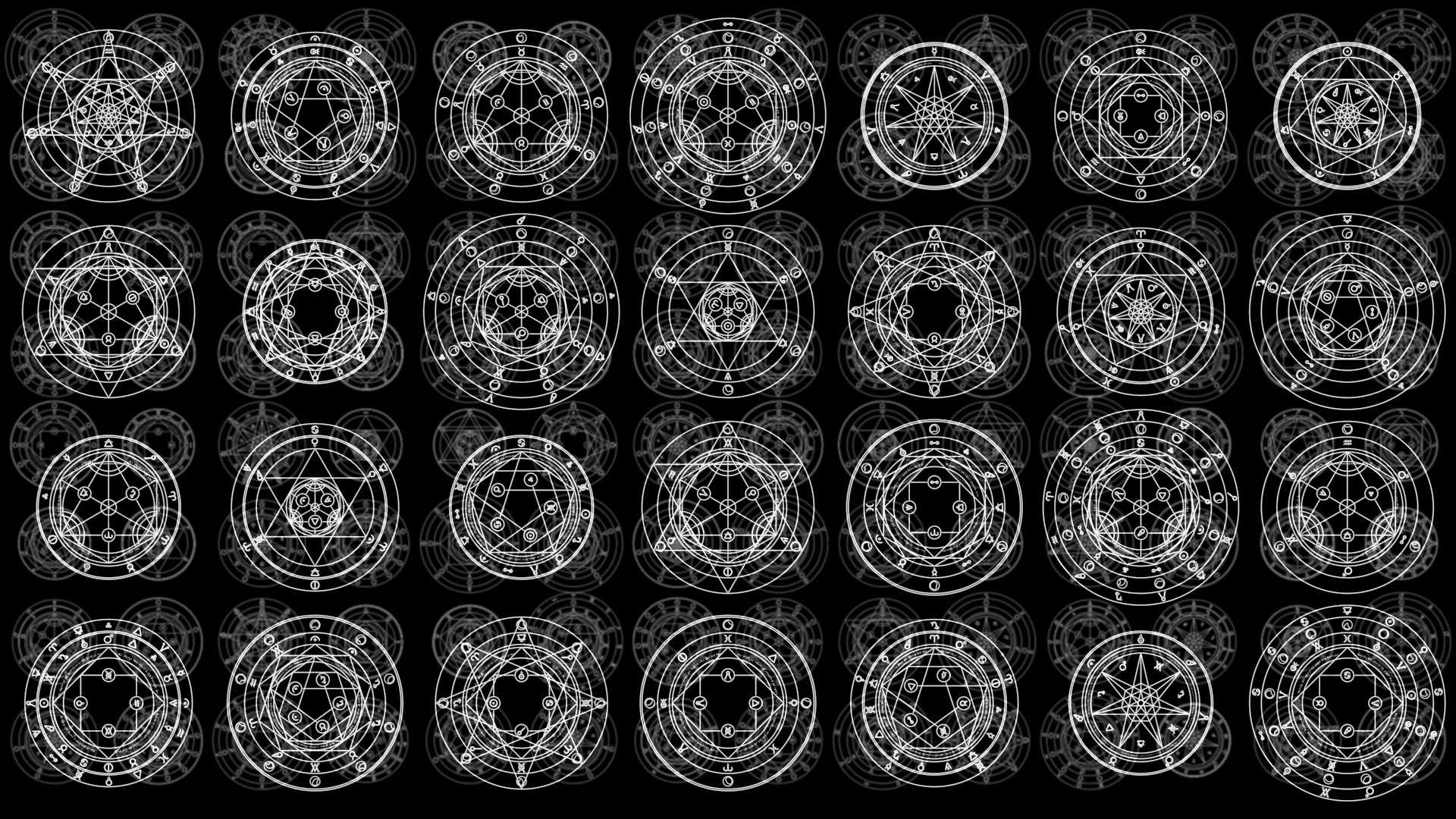 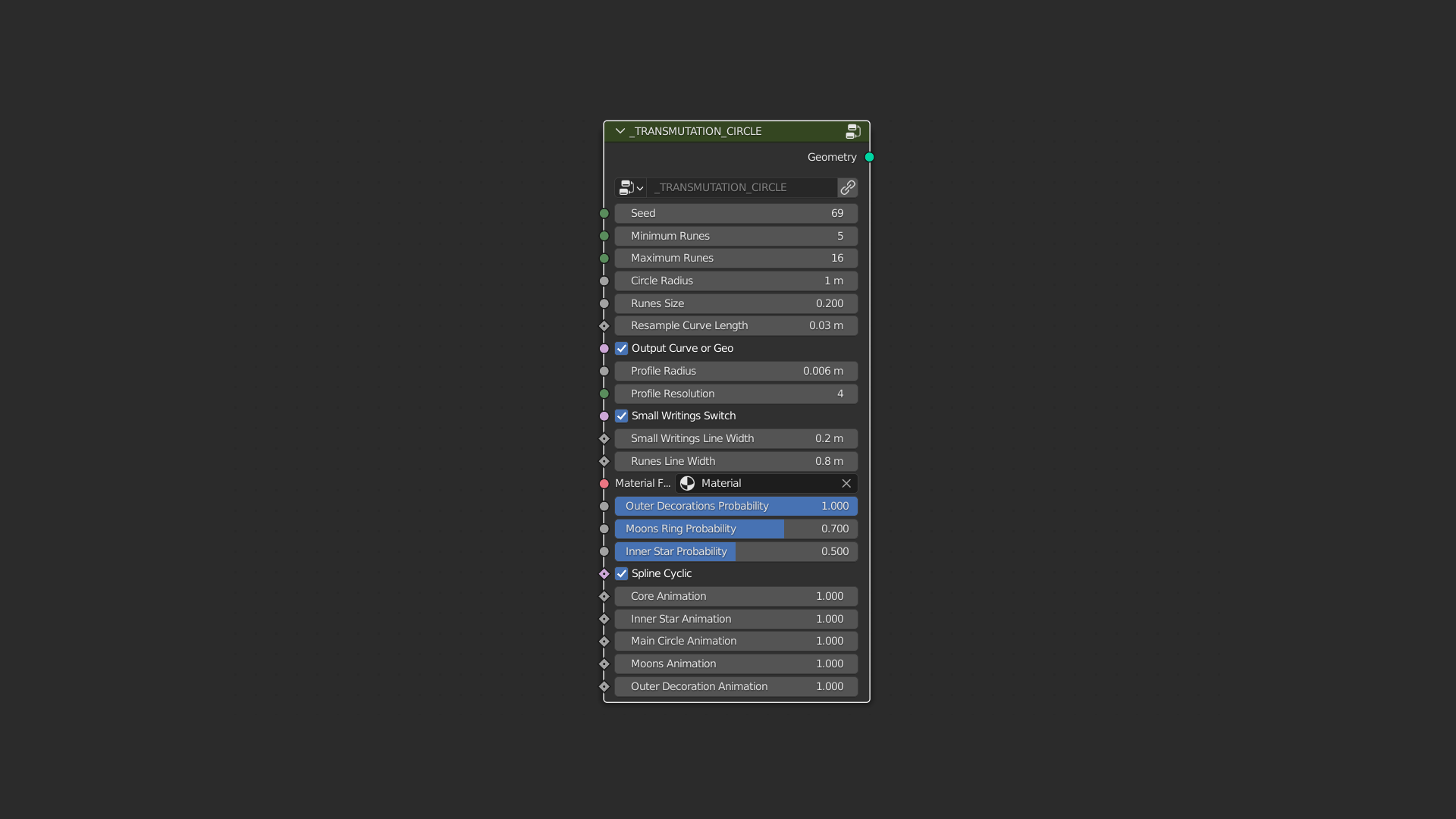 A Geometry Node Fields Setup that allows you to create a vast range of Transmutation Circles with a lot of parameters for Procedural generation, Animation and possibility to create curve of geometry circles.

The Core motif is based on the number of runes on the main circle so that on each corner on the center piece we'll find a rune next to it. We take a core that has either the same amount corners or is divisible by 2 or 3 and chosen randomly if we have the luxury of choice. On the exception of number 11 and 13 who are prime numbers and too high to not make visual noise if we had a star with that many corners in the core, for these the core is randomly chosen between all the cores.

The Runes visible on the main circle, in the cores and on some outer decoration are letters using a free for commercial use font, you are free to use the same as I did but feel free to change it by going inside the _RUNES node-group : 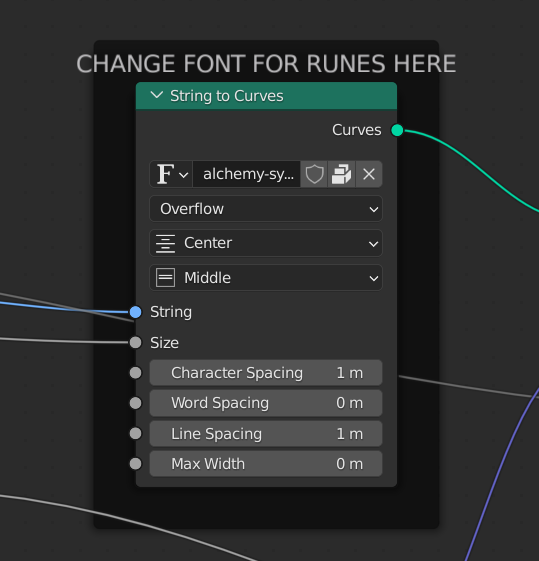 Here you'll find a string to cruves node with the font alchemy-symbols change that to the font you want, by either changing it in the root blender file you downloaded or by appending the node group _TRANSMUTATION_CIRCLE instead of linking it.

The Size of the runes as well as the size of the geo can be changed easily from the parameters.

The Handwritten notes that appear in all the cores can be disabled or resized (geo) in the parameters, they use a font made from my own handwrittings feel free to use it for commercial use or change it by going inside the _WRITINGS node-group: 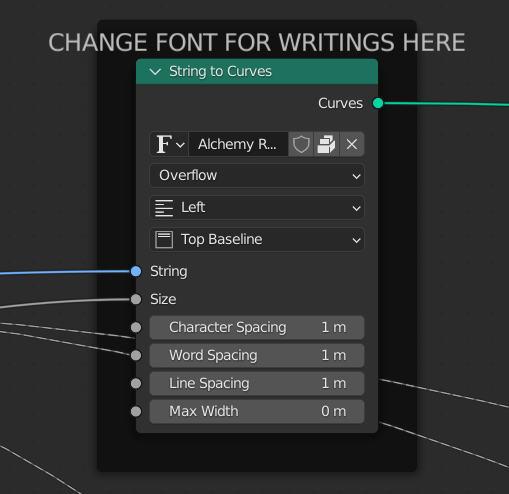 The Moons Circle is a set of proceduraly generated facets of moons their design is simple and straightforward, you can choose to not have them if you don't like them by setting their probability of appearing to zero.

The Outer Decorations are a set of patterns to differenciate even more every circle. They use the same logic of number of elements as the rest. And range from star englobing the whole circle to another rune circle or moon circle. Again you can choose not to have any by setting the probability to zero for outer decoration.

You can choose to see either a curve or geometry which is an extrusion of your transmutation circle's curve. I recommend working with a curve until you find a design you like and switching to geo if needed.

You could export it to grease pencil by putting the geo node-group on a cruve object and applying it when you're done choosing a design then Convert To -> Grease Pencil and from there you could export as PDF or SVG.

For writing on a surface you'll need a very high poly surface, and a geo node on it with a geometry proximity node with the circle set target as target (set output type to geometry). Then output the distance to a custom attribute and in your material add an atribute node, set the name you've chosen for your attribute and you'll have to tweak on your own from there.

YOU NEED TO TURN OFF SPLINE CYCLIC IN ORDER TO ANIMATE

You have 5 different knobs at your disposal for animating your circles drawing themselves. One for each part of the circle oredered by distance to the center :

Link or Append to your projects

Click File->Link.. or File->Append.. and navigate to the directory in which you saved the TRANSMUTATION_CIRLCES_LOGAN_DELMAY.blend file, go to Node-Tree and select the _TANSMUTATION_CIRCLE it should be along-side _RUNES and _WRITINGS that are also named with an underscore at the begining for convenience as you need find them to change the fonts as explained above. But you should link or append only the  _TANSMUTATION_CIRCLE and everything should follow.

Do not try to resuscitate the dead with these circles they are meaningless I did not study Alchemy nor black magic. 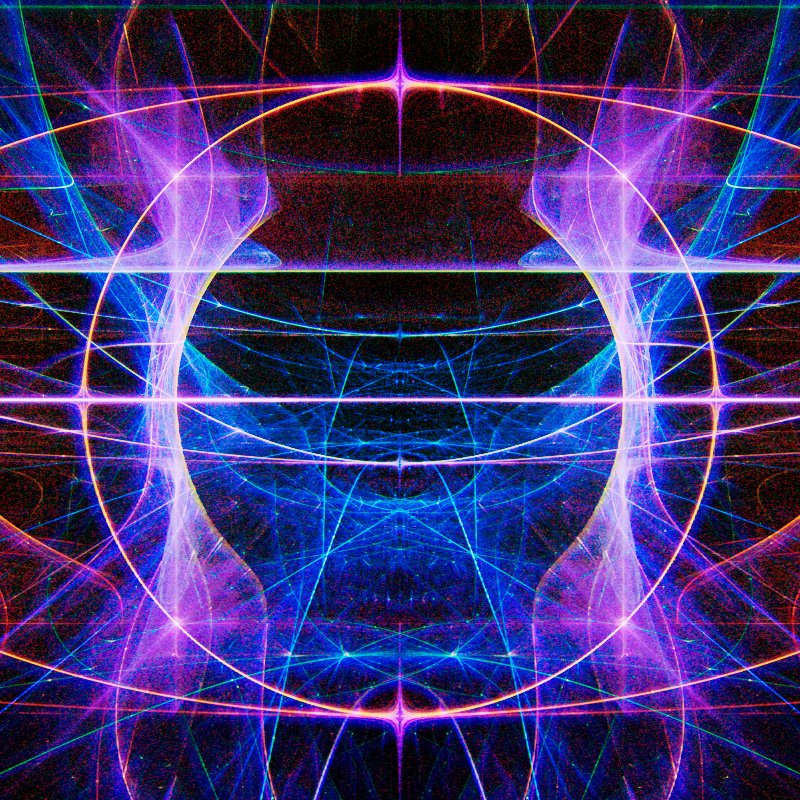