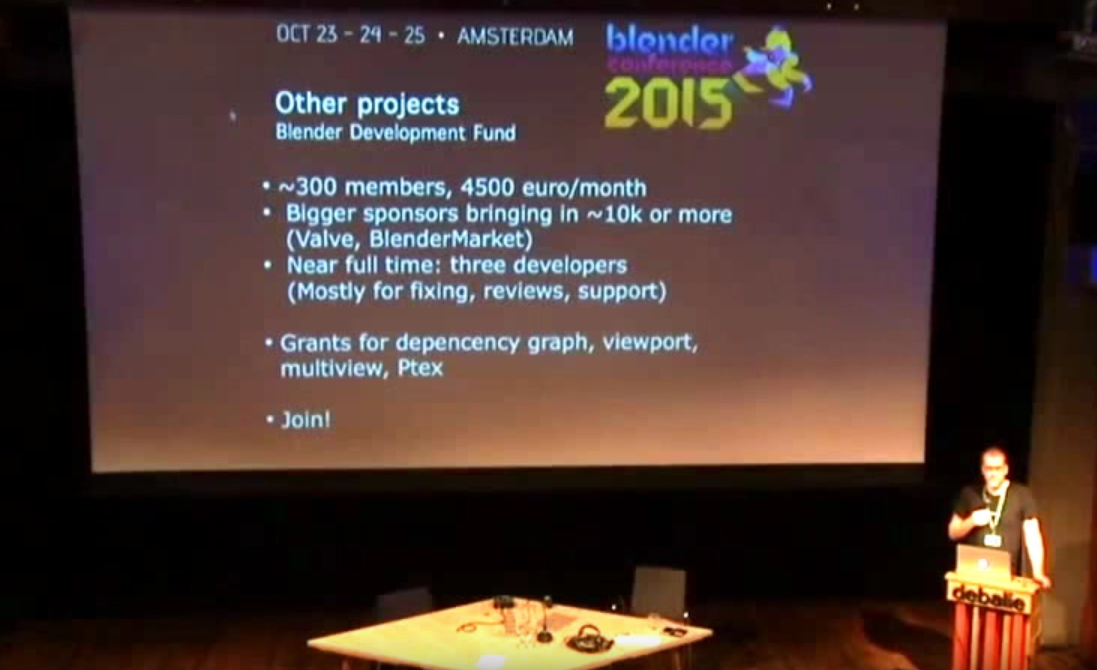 With 2015 in the mirror I would like to take quick look back and review the year on the Blender Market. This post includes the good and the bad, but before I dive into the nitty-gritty, a huge thank you goes to all our customers, creators and the community for all the support and love you've shown us. Now with that said, let's get to business.

As a business the numbers are really important us. The numbers determine if we live or die and ensure if we can continue operating. How did the number add up in 2015? Pretty good, all things considered! In 2015 the Blender Market saw $145,960 in revenue, with a net loss of $47,210 for the year after all expenses were paid. This comes out to an average revenue of $12,160/month, up from $8,140/month in 2014; which is approximately 50% growth in average monthly revenue when compared to 2014. On the creator side of things; creators earned $91,590 for the year, $6,740 of which was contributed to the Blender Development Fund on the creators' behalf.    All in all we're thrilled with the progress made in 2015. We may still be showing a loss, but the future looks very promising and we're here for the long-haul.

If anything, 2015 was a validating year. Personally, my proudest moment was becoming one of the Main Sponsors of the Blender Development Fund, putting us up there next to Valve's Steam Workshop and Giants Software.

More than anything, this step solidifies the Blender Market not only as a viable project, but also as a great model for advancing Blender's development directly through the efforts of the community most invested in it. The market also got a nice plug in Ton's keynote speech at this year's Blender Conference. That felt good.

Since launch, we've intentionally kept the number of product categories on the market pretty specific and slim so as to keep products heavily focused on certain Blender needs. However, one such need was missing. Education! In September, we added our first training product to the site: Jonathan Lampel's Mastering Mountain Environments. Since then, we've published 4 other training products on the site. As noted in the chart below, training only accounts for 1% of total sales on the site, but I believe it will grow and become a significant factor in 2016.

The highest-selling categories are those that improve upon Blender's default features through the use of specialized scripts and add-ons. Material, Shaders and Textures is the next hot-selling category, with Models following closely behind. The Earnings per category are roughly equal to Sales per category:

Let's talk about elephants. I'm aware of a big, white one in the room...and I want to address it now. Development progress has been slow. We've talked a lot about improvements that need to be made, such as a better product documentation system, multi-file upload for creator products, product ratings, etc. These discussions have been going on for a while and not much has changed since our original launch back in June 2014. So here is the deal: the market is just one part of CG Cookie, and we had a huge 2015 on the education side, what with a complete redesign of the education side.

The relaunch, coupled with the fact that we only have one full-time web developer, for both sites, is why the Market hasn't gotten an update in a while. Let's just say that development time and focus is at a premium. However, we are committed to changing this in 2016. For the last few months, we have been carefully updating a lot of the internal structure of the market, migrating it to the same system as the education site. What this means is that both sites will share much of the same internal functionality (like notifications, user databases, etc), enabling us to kickstart development much more effectively. This effort has been ongoing and is getting closer to being done. Once this infrastructure migration is complete we will be re-focusing on the actual feature development and bug fixing for the market. Which leads me to this: what's next?

With over a year of suggested improvements to the site, we have a lot of potential areas to focus on. However, the goal with any update is simple: the Market needs to become better for you, our customers and creators. We know the areas that need our attention the most and we are committed to addressing these. A few things specifically: an improved search function, product ratings, better product documentation, improved discoverability, and many other features that have been lacking. 2016 is going to be a kickass year for the Market, and I am excited to push it to new heights together, with you, my fellow Blenderheads. To victory!

How was your 2015? We'd love to know about your year, what were your greatest achievements, where did you fall short and how will you move forward into this new year?