by New Media Supply in Scripts and Addons

What is the Material Nodes addon?

- The Material Nodes is an addon that provides node groups you can easily plug in to your node tree. No need to append node groups, you only need to install the addon. Therefore you can easily speed up building a material. Or you can improve an already existing shader.

There are 24 useful node groups included at the moment (more to come). This addon is designed to speed up your workflow and making materials easier.

Also those not familiar with nodes, are on the right place. There will be a tutorial serie Material Nodes. Part 1 and 2 are available here: (soon more to come).

In the future there will be more nodes provided. Price of the addon will change but if you already have Material Nodes by then, the updates will be for free.

Note: All node-groups are compatible with EEVEE as well as with Cycles. For Blender 2.81, see notes below.

What is in it for me?

For who is the Material Nodes addon?

- For those who want to get rid quickly of the sterile look of standard materials.
- For those who are downloading textures and want to correct the albedo values or bring some more variety to the textures.

For now, best is to use the Material Nodes addon with Blender 2.80.
At the moment there are some issues with bump nodes in Blender 2.81.  This because the Blender developers are improving the bump node, but at the cost of performance. This means, at the moment, that once there is a nodegroup in the material the bump map stops working (bug). Also the calculation of bump maps are a bit longer. You can do a few things: a) await some bugs to be fixed. b) ungroup node groups. c) don't use bumpmaps (but normal maps).

In case you wonder what is the Vector throughput for; it is to have a cleaner layout.  Instead of connecting vector input sockets to the same Mapping node, you can now connect the Vectors throught.  Here an example: 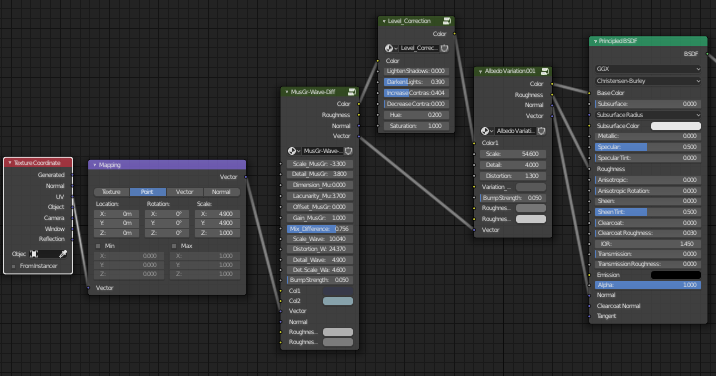