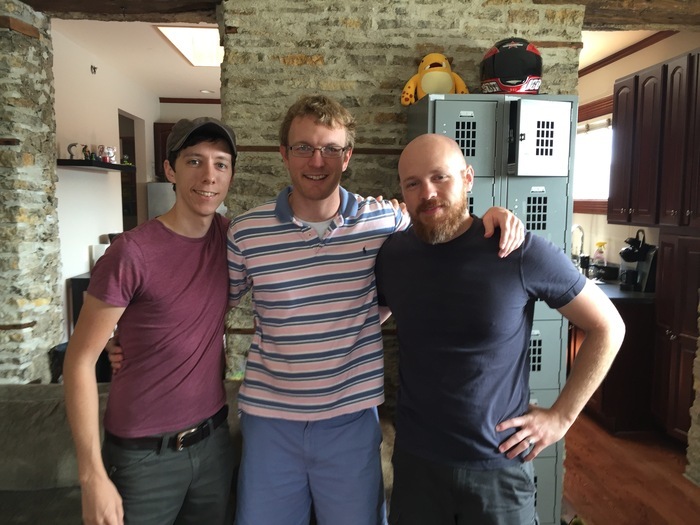 That Friday was as beautiful and hot as they get in Chicago in July and the following weekend promised more of the same. Yet, the three gentlemen met with a plan to stay behind closed doors for three days straight. The reason was an intense coding sprint and their goal was to come out at the other end with a tool that is better, stronger and more stable than ever before. The tool in question is of course the famous RetopoFlow and the three gentlemen were none other than Jonathan Williamson, Jonathan Denning and Patrick Moore, the team behind RetopoFlow’s success. The short story is that they succeeded and caught up on their tans on the weekend that followed. The long story is a must-read for anyone looking to make the big bucks with their next Blender add-on.

The subject of the 3-day coding sprint, RetopoFlow, was released as a commercial retopology tool for Blender. In fact, it was one of the original commercial Blender add-ons, created with a belief that a production-ready tool could be made into a financial success. So how has the RetopoFlow done? As of July 2015, RetopoFlow has sold over 630 copies, with just over $30,000 in revenue. At a price of $71.25 it currently averages over 80 sales each month and has been the number 1 seller on the Blender Market since its release. For a commercial plugin to achieve that within its lifespan in a market that previously did not exist (remember, RetopoFlow is one the first commercial Blender plugins!) is certainly nothing to shake a stick at.

RetopoFlow’s huge success goes hand in hand with the Blender Market model. The Market, which recently turned 1, was founded with the vision of providing a stable environment for developers, allowing them to get paid for writing custom tools and giving an independent artist a means of supporting themselves. Since no such marketplace existed one year ago, how were we to know that this would work? Enter RetopoFlow, the laboratory mouse that was unleashed to test the following hypothesis: that a commercial plugin can succeed within the Blender community and make enough money to pay for itself. Today, the outcome of our lab experiment is this: the Blender Market model is working. RetopoFlow succeeded, which means its success can be replicated, even exceeded!  We have an ecosystem where independent developers within Blender can be compensated for their time and maybe even make a living by selling Blender addons. These are exciting times.

To understand why Blender Market is successful, we need to look at the big picture of creating Blender addons. Historically, the number one problem for third-party Blender tools has been their lack of reliability. They would work for a couple of months until their developer would get busy. Something would inevitably change in Blender and before you knew it, the tool would break. The unfortunate consequence was that a professional artist or a studio could not rely on these tools as there was no guarantee that they would continue to work. One reason for this is Blender’s ongoing development as the addon needs to be updated with every major new release. But with Blender becoming more stable than it used to be, this is becoming less of an issue. Much more important is the ability to fix bugs, which will come up regardless of how good your build is. If you expect people to use your tool in a professional environment and pay you for it, you need to be fixing bugs for them. What was the reason the tools weren’t getting fixed? It simply did not make economic sense for their developers, because the tools were relying on a donation model. As it turns out, this did not make the ongoing maintenance worth their while.

The donation model is simple; I create a cool tool for myself and make it available for others. If you like it - great! Go ahead and donate. As inspiring as this approach is, it doesn’t work long-term. It is very, very hard to maintain a professional-grade tool without serious commercial backing to pay for your time and we have seen time and time again that voluntary donations do not provide this backing in the long run. Hold your horses, you cry. Isn’t Blender also donation-based? And doesn’t it work just fine? Certainly, but let’s not forget that Blender itself started as a commercial tool and only became open-source later, once it had a large following already. If you have a strong momentum in place and then make your product donation-based, you have a much larger chance of success. But without having a foundation to build on, it is incredibly difficult. This is why it is essential to have a place like Blender Market, allowing you to set a fair price for your product and get paid for its sustainable development.

Before You Quit Your Day Job

So now that we have Blender Market, this problem is solved and all I need to do is create a kickass addon that will make me enough money to pay for the occasional update...right? Let’s go back to RetopoFlow for a minute to put things into perspective. Passing up on a relaxing weekend, Jonathan W., Jonathan D. and Patrick spent 12-16 hours per day improving the tool, for 3 days straight. The team refactored the addon, taking everything they had, optimized it and rebuilt it for a better structure. They added new features and fixed bugs, making RetopoFlow more reliable and easier to work on in the future. The whole process involved not only large amounts of coffee, but also the cost of bringing together 3 people from different parts of the country - not to mention putting any of their other work on hold. Now consider this: since the first version of RetopoFlow was created in May 2013, this was already the third development sprint the team has done! No, we are not talking about being one week into the project and a team that is bright-eyed and bushy-tailed with brewing excitement and euphoria. We are now years into the development of RetopoFlow, yet the drive and motivation to create something better is still very much there. That is really, really hard to do and to keep up for coding sprint #3.

Incidentally, the magical number 3 as a rule of thumb for developers was mentioned by Jonathan Denning in his talk at the Blender Foundation Conference: “When developing something, I typically make it three times. The first time is just to figure out what I am working on...then completely scrap it, write it once more and simplify, then scrap it again. The third time you make it, it will be much more polished.” This should put things into perspective a bit, because RetopoFlow’s commercial success is only one part of the story and the long-term commitment involved in creating a production-ready tool is not to be underestimated. Yes, it can be done. Thanks to the Blender Market, developers can be paid to create and maintain new tools and push the features of Blender further than they have ever been pushed while also contributing to Blender’s development fund. This is all possible. So if you have a genius idea for the next addon to revolutionize the way we use Blender, by all means - give it a go! If you do it well, chances are you will get your time investment paid off, and then some. But be aware that the development is only the first step - and be prepared to give up more than one sunny weekend in the months and years to come.

Are you thinking of making money with Blender? Stay tuned for upcoming blog posts on how to get started! Subscribe to our newsletter. To see what makes the RetopoFlow the most popular addon on Blender Market, visit its page. For other addons created in-house by CG Cookie, view our vendor page.